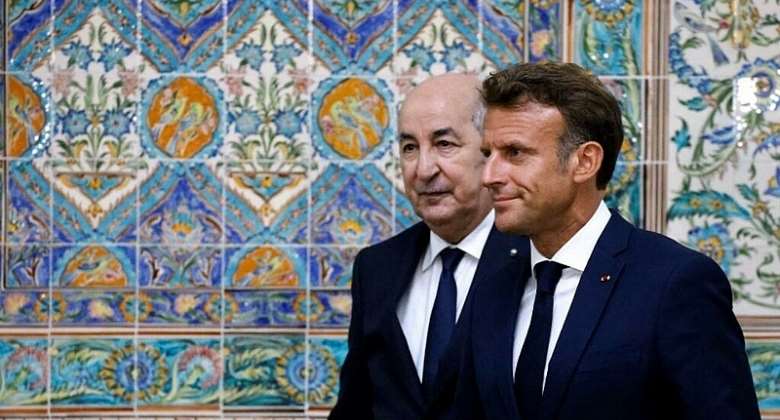 French President Emmanuel Macron will end a three-day visit to Algeria this  Saturday after meeting with sportsmen and artists in Oran before returning to Algiers to officially seal the relaunching of bilateral relations.

The French head of state has visited the port and the chapel of Santa Cruz on the heights of Oran this Saturday, and then moved on to the HQ of the Disco Maghreb label, which is emblematic of Raï – a musical movement that came to the fore in Oran in the 1980s before conquering a worldwide audience.

Macron is then due to meet young people and sportsmen during a breakdance demonstration.

The French president, who arrived in western Mediterranean city on Friday evening, also dined with writer Kamel Daoud and other Oranese personalities.

Earlier Friday, Macron called for a "new pact" with Algeria and "truth and recognition" of the past, on day two of his visit to France's former colony.

The trip follows months of tensions between Paris and Algiers, which earlier this year marked six decades of independence following 132 years of French rule.

The three-day visit also comes as European powers scramble to replace Russian energy imports – including with supplies from Algeria, Africa's top gas exporter, which in turn is seeking a greater regional role.

Macron had proclaimed a "new page" in relations after meeting President Abdelmadjid Tebboune and announcing the creation of a joint commission of historians to examine the colonial period and the devastating eight-year war that ended it, at a cost of hundreds of thousands of lives.

On Friday, Macron – the first French president to be born after Algerian independence in 1962 – told journalists he wanted "the truth, and recognition, otherwise we'll never move forward".

After his visit to Oran this Saturday, Macron will return to the capital Algiers to sign "a joint declaration for a renewed, concrete and ambitious partnership" with his Algerian counterpart, Tebboune, before returning to France.