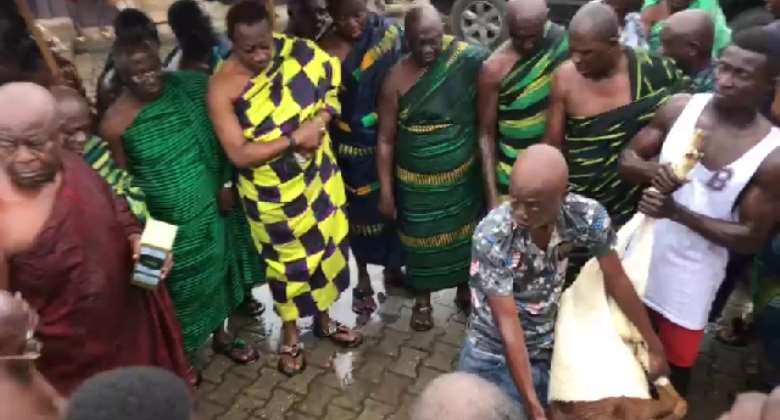 The Asantehene Otumfuo Osei Tutu II’s spiritual head, Daasebre Obiri Okomfo has described as worthless the decision by his colleague chiefs to banish the founder and leader of the United Progressive Party (UPP), Mr. Akwasi Addai Odike for speaking ill against some chiefs in Ashanti region.

The Otumfuo's spiritual head known in private life as Osei Tutu Nyamekese did not mince words to say the actions of his colleague chiefs are outmoded.

Daasebre Okomfo registered his disagreement with his colleague chiefs in the region while reacting to the news of Odike's banishment from Manhyia Palace in an interview with Mr. Emmanuel Quarshie, the host of the Ghana Yensom morning show on Accra 100.5 FM on Tuesday, August 23, 2022.

Odike was banished by the chiefs for alleging that the chiefs were involved in the galamsey menace across the country.

Daasebre Obiri Okomfo rather called on his colleagues to investigate and ascertain the veracity of the claims of the politician who is also a son of the Ashanti soil.

According to him, the decision to banish Mr. Akwasi Addai Odike is not in sync with the tenets of the 1992 Constitutional democracy.

“We must know that we are out of the days of banishment,” he said.

He noted that if this tradition was to be followed, all the pastors, imams, and politicians who do the unthinkable in society should all be banished too.

“Today chiefs are marrying their siblings which is also a crime punishable by banishment but nobody speaks about this,” he noted.

Today all these misfits in society that were frowned upon some time ago are being welcomed.

These are not a bother to many of my colleague chiefs…hypocrisy has become the order of the day,” he lamented.

Disagreeing with the decision of his colleagues to banish Odike, he said the banishment is not workable in the current dispensation.

“Banishment is against the law and in contravention of the democratic principles of the country,” he stated.