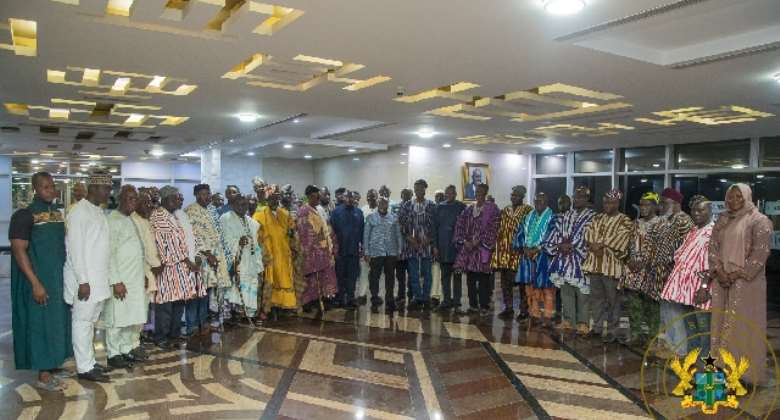 On Thursday, August 18 the Overlord of Dagbon, Ya-Naa Abukari Mahama II, sent a delegation to Jubilee House, to inform President Nana Akufo-Addo of the death of Mion Lana Naa Abdulai III, the Chief of Mion.

Nana Akufo-Addo described the late chief as a young man, who had a good heart, and was a lover of his people.

“He was a respectful and obedient Chief to his Overlord, and who was determined to do his bit to advance the welfare of the people of Dagbon,” he added.

The President expressed hope that, when the funeral rites are concluded, all will co-operate to find a worthy successor to him as Mion Lana because, in his view, it will be one of the best ways “we can pay tribute and honour to his memory.”

He expressed his condolences to the Yaa-Na, the family of the late Mion Lana, and the people of Dagbon.

The Mion Lana, who was the heir apparent to the Dagbon Skin, passed away on Wednesday, 17 August 2022, at the Korle-Bu Teaching Hospital after a short illness.

He was the next in line after Yaa Naa Abukari Mahama II, based on the rotational system of the Dagbon kingship.

Known in private life as Mahamadu Abdulai, the late Mion Lana was 48.

Shortly after his death was announced, his remains were airlifted to Yendi for burial.

Greedy and selfish appointees sending NPP into opposition — ...
24 minutes ago