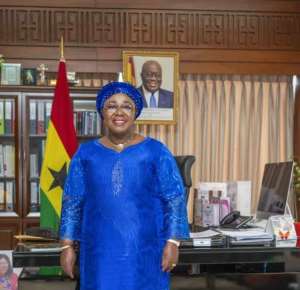 Earlier, the Chief of Staff, in a letter dated August 10, 2022, gave Prime Mark Company Limited, publishers of the “Herald Newspaper” a 24-hour ultimatum to retract and apologise for the “defamatory” publication against her by the Newspaper.

The Newspaper, however, failed to retract the publication and apologise.

In a statement of claim filed by Mr Gary Nimako Marfo, counsel for the Chief of staff, the Plaintiff said the defendants in one of its publications had a headline with her picture stating that: “More Rot Emerge from BOST with Chief of Staff Named Again!”

According the Chief of Staff, that publication sought to suggest that she was the person who engaged in dishonest/illegal activities at BOST.

“The Plaintiff understands the defendants’ statement that 'The Herald' is informed about some fraudulent disposal of some cars belonging to BOST.

“The cars were disposed of under mysterious circumstances after an auction was halted midway in the name of the Chief of Staff in the Office of the President, Akosua Frema Osei-0pare,” it said.

According to the plaintiff the above statement meant that she was “criminally minded and engages in fraudulent transactions.”

“The plaintiff said the 'defamatory” statements were made without any just cause and were intended to cause her public ridicule, disaffection and to reduce her image in the eyes of right thinking members of society both in Ghana and abroad.”

“Plaintiff avers that the said publication has portrayed her as a person who encourages in the commission of criminal and illegal activities and that same was calculated to injure her reputation and also expose her to hatred, public ridicule, damage to her person, profession and lower her estimation in the eyes of right-thinking members of society,” the statement aaid

She is, therefore, praying the High Court for a declaration that the defendants’ publication as particularised in the statement of claim with the headline “More Rot Emerge from BOST with Chief of Staff Named Again!” was defamatory and same was made without any basis.

Again, the Chief of Staff is praying the court for “a declaration that the defendants’ publication was without any basis.”

Also, the plaintiff is praying for an order of injunction directed at the defendants, agents, assigns, privies from continuing to make any further defamatory publication about her.

She is seeking a “compensatory damages in the sum of Twenty Million Ghana cedis (GHC20,000,000.00) for loss of reputation against the Defendants,” the statement of claim averred.