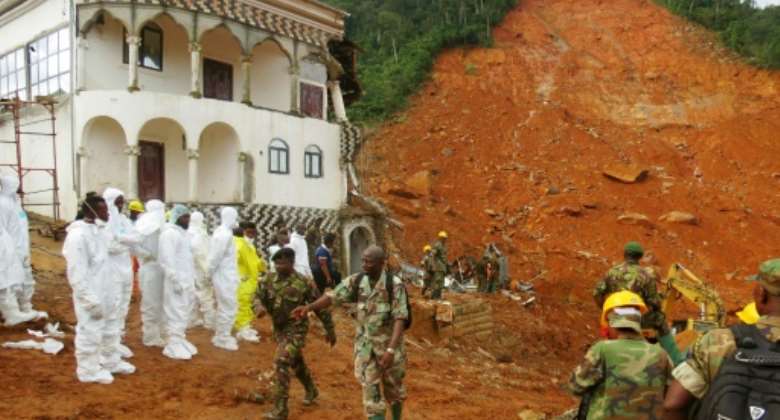 Five years after a devastating mudslide killed more than a thousand people in Sierra Leone's capital, conservationists and survivors worry that poor governance could lead to another disaster.

"Before the mudslide... I lived a happier life with my family," said one survivor, Alimamy Bubu Conteh.

"But now we live in misery and suffering."

He was speaking Wednesday at a remembrance ceremony where religious leaders held prayers for the victims under a deluge of rain.

On that day in 2017, as heavy rains lashed the slopes of Sugar Loaf, a mountain in Freetown left bare by chronic deforestation, huge boulders suddenly detached. They rolled onto informal settlements, crushing shacks and enveloping entire households in red mud.

A 2018 World Bank report estimated that damages amounted to $82.41 million.

Today, although most of the rubble has been cleared, a muddy red scar remains on the mountainside.

"Each time I look at that hill it reminds me of the disaster and it makes me sad," Kamara Kariffa Hassan, a local municipal official who lost 25 members of his family, told AFP.

"We want the government to protect our forest for the future generation."

But it could happen again, say experts.

"Continued deforestation for charcoal burning and building houses in mountain slopes may likely be the main causes for the next mudslide disaster if urgent steps are not taken", he said.

"Can't we learn from our mistakes when catastrophe hits?" said Daniella Samura, a conservationist at Tacugama Chimpanzee Sanctuary, in the Western Area Peninsula National Park.

More than a thousand people died in the disaster five years ago. By SEYLLOU (AFP)

Some parts of the sanctuary, which is near Sugar Loaf Mountain, were also hit by the 2017 disaster.

"People are still living in risky areas and destroying the environment along with its rich biodiversity," Samura said.

Gabriel Kpaka, director general of the Sierra Leone Meteorological Agency, said the 2017 mudslide was caused by a combination an increasingly unstable mountain slope and a sudden change in water content.

It could have been prevented with better equipment, such as radar, flood forecasting software and trained meteorological technicians.

Four major floods over the past 15 years have affected more than 220,000 people in Sierra Leone and caused severe economic damage, according to the World Bank report.

Even this week, heavy rain prompted the disaster management agency -- set up in 2020 -- to issue flood warnings Wednesday, after a three-day downpour.

And Sierra Leone's rainy season typically runs from May to October.

After the 2017 disaster, the government reacted by planting some 2,200 mango, banana, avocado and moringa trees.

It set up its National Disaster Management Agency in 2020, which has been working with the UN to determine whether the affected area is habitable.

And officials are also cracking down on illegal housing on the mountainside.

"We have 60 disaster-prone settlements in slums and mountain areas within Freetown, and we are working on sustainable mitigation measures through awareness raising mechanisms", the agency's deputy director, John Rogers, told AFP.

Four major floods over the past 15 years have affected more than 220,000 people in Sierra Leone. By (AFP)

In 2018, the government allotted 52 housing units donated by philanthropists to mudslide survivors -- but only a fraction of the 3,500 survivors have benefitted from the scheme.

Conteh is not among them. His family of 12 lost their home in the disaster.

But the 65-year-old said: "We moved from one shack to an unfinished building with (damp) walls... and cracks on the walls.

"I had nowhere to go with my family but to return near the disaster zone when the rent allowance the government gave us finished."

And although he requested relocation to a safer area, his appeals were ignored.

No insurance package for commercial 'pragya' operators - NIC
28 minutes ago