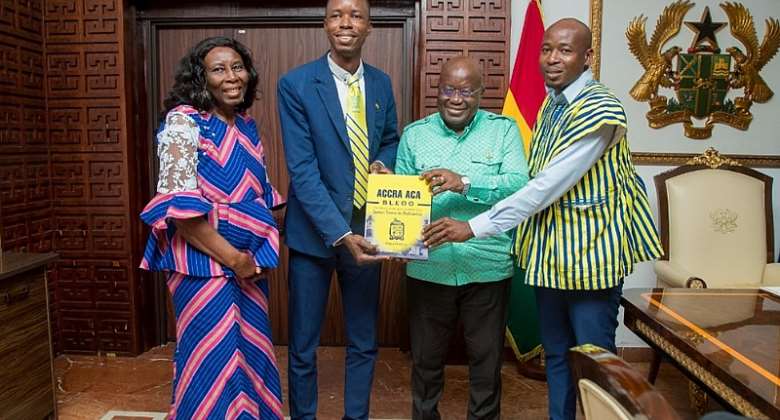 A delegation from Accra Academy paid a courtesy call on President Nana Addo Dankwa Akufo-Addo at Jubilee House to present a copy of the school’s first history book to the President on 15 th August 2022.

Speaking at the ceremony, Justice Mawulorm Dotse, a Justice of the Supreme Court of Ghana, noted that the book epitomizes Accra Academy. He said the school was started by four patriotic Ghanaians in the “ghettos of James Town” to offer secondary education to the less privileged in society and that they succeeded in doing so. Mr. Emmanuel O. Fiemawhle used the occasion to thank President Akufo-Addo for the Free SHS policy, noting that it had been of immense benefit to less privileged students in the country.

The author said it was worth noting that Accra Academy was founded by four young men below the age of 30. The youngest of them, S.N. Awuletey was 26 years old at the time. G. N. Alema and J. A. Halm-Addo were the eldest of the four at age 29 and K. G. Konuah was 27 years old at the time. He noted that despite their age they succeeded in establishing one of the most celebrated secondary educational institutions in the country.

The author stated that some humble attempts were made in the past to document the school’s history. He indicated that the earliest attempt he found was an 11-page article in the school’s Golden Jubilee brochure written by then Dr. Robert Addo-Fening in 1981, noting that Prof. Addo-Fening had reviewed the first five chapters of his book. According to the author, the second attempt he found was in the forward to the school’s hymn book written by Dr. K. G. Konuah three years before his demise. This was in 1993 when Dr. Konuah was 89 years old. The author added that there have been many instances when old boys have recounted some history of the school in the form of lectures or speeches during the school’s commemorative events such as founders’ days and speech days but it still took the school nine decades to have a book dedicated to its history.

According to the author, President Akufo-Addo’s connection with Accra Academy precedes that of the early 1960s when the President taught at the school for six months. He said when President Akufo-Addo was 12 years old, his father, Mr. Edward Akufo-Addo, was appointed to the first constituted Board of Governors of the Accra Academy under the chairmanship of Dr. K. G. Konuah. He noted that earlier still when the President was about 7 years of age, his maternal grandfather, Dr. J. B. Danquah, was appointed to serve on the first Board of Management of the school in 1951 under the chairmanship of Mr. James Godfrey Tetteh O’baka Torto.

The author described the 726-page book as informative, educative, and entertaining, noting further that it represents the founding tenets of the Accra Academy, namely: Not for school but for life, not for self but for others.

In response, President Nana Addo Dankwa Akufo-Addo, praised the author for his initiative noting that it was heartwarming that somebody could have that degree of attachment and spend so much time and energy putting the book together. The President stated that unfortunately much of the country’s history is written by others, hence, there was a need for more Ghanaians to write our own history.

Speaking about the Free SHS Policy, the President said the merits of the Policy were self-evident in countries that have implemented it. Making reference to the United States of America, the President noted that it was the first country in the world to have a free secondary school system which gave every American an opportunity to be educated. He noted that similarly the fortunes of Ghana can be improved with the initiative by giving every young Ghanaian access to free secondary education.

The ceremony concluded with Mr. Simon Ontoyin making a formal presentation of his book to President Nana Addo Dankwa Akufo-Addo.