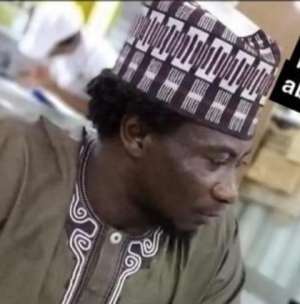 After going into hiding for many months, a certain Malam Mohammed, a teacher who allegedly impregnated a teenage girl and took her through a risky abortion, has been arrested by the Tesano Police.

The auntie who reported the case to the Tesano Police Station when the incident occurred, told DAILY GUIDE that the investigator of the case called the girl, Fati, to inform her that the suspect has been arrested and so she should come to court last Friday.

The cursory message to the girl, now 17 or so, had the auntie wondering which court they were expected to go until a clearer picture was painted for her. The suspect has been granted bail as he awaits the next court date

It would be recalled that when the incident occurred, DAILY GUIDE broke the news to which the IGP reacted swiftly by not only talking to the victim's mother but had her sent to the Police Hospital for attention. She was on admission for over a week or so, as the search for the said Malam Mohammed continued.

The said Malam Mohammed was allegedly in an amorous relationship with the girl, from the time she was 13, according to the victim's narration.

The Tesano Police Station's Domestic Violence and Victim Support Unit (DOVVSU) was on the heels of the teacher whose wife at the time said she did not know his whereabouts.

The victim used to attend an Islamic school in Fadama, Ansarudeen Academy, where the said Malam Mohammed is a teacher.

The orphaned girl, who is in the care of her aunts and grandmother, told her aunties when they suspected that she was pregnant after a denial at first, that it was Malam Mohammed who was responsible for her pregnancy.

One of her aunts, Hajia Rabi, said she should not abort the pregnancy but should carry it full term. That was however not to be after Malam Mohammed allegedly convinced her to go for an abortion at a shop-like facility.

According to Hajia Rabi, “Malam Mohammed took the girl to a shop situated at Abeka near the Fadama Junction and Enumerekua for the procedure at about 8pm. After the procedure, Malam Mohammed allegedly dumped the girl at the gate of her grandmom's house at Kasoa, leaving her to her fate.”

The girl experienced some pain as she lay in her room where she was eventually delivered of a five-month-old foetus, according to one of her aunties.

Malam Mohammed, according to Fati, promised to buy an Iphone 12 Max, and some money to start a trading venture.

Hajia Rabi disclosed that the Tesano Police after the report was made to them went to Malam Mohammed's house, but did not meet him. His wife told the police that he has not been home for some days now. He was invited to report to the police through a letter which was left for him through his wife.

When the girl led the police to the said shop where the injection was administered, there were two ladies who she identified. Even though the ladies said they know her, the man who administered the abortion procedure was not available.