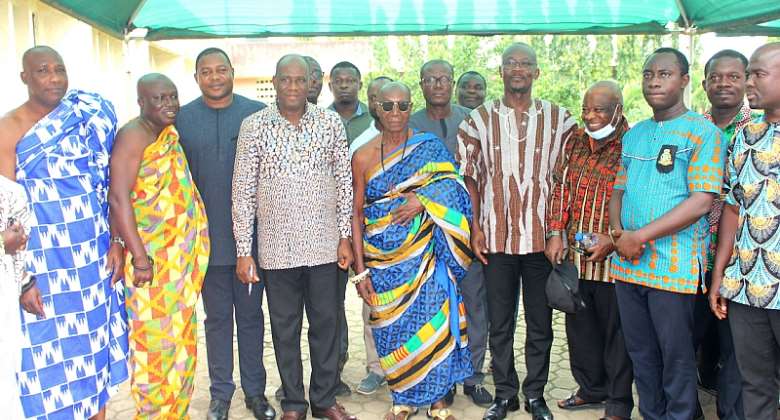 A Deputy Minister of Local Government, Decentralisation and Rural Development (MLGDRD), Collins Augustine Ntim has commended the Municipal Chief Executive for Obuasi Honorable Elijah Adansi-Bonah for spearheading the successful implementation of the policies and programmes of government in the Obuasi Municipality.

In an interaction with the media after a day's working visit to the Obuasi Municipal Assembly, the Minister who doubles as the Member of Parliament for the Offinso North Constituency said, the visit was to acquaint himself with details of how Government's flagship programmes in the various sectors of the economy have been implemented by the Metropolitan Municipal and District Assemblies in the country.

He emphasized that the President, His Excellency Nana Addo Dankwa Akufo-Addo has put in place several programmes and policies that are intended to ensure equitable distribution of State's resources in a bid to evenly spread development across the country.

The Deputy Minister added that the success of programmes such as Planting for Food and Jobs, Planting for Exports and Rural Development, One District One Factory, Free Senior High School, the Digitization agenda are manifested at the local level hence it was imperative for the Ministry of Local Government, Decentralisation and Rural Development to visit the MMDAs to ascertain their level of implementation.

He again lauded the collaboration that exist between the Assembly and its major stakeholders especially Nananom in promoting development at the local level.

He said "I wish to acknowledge the level of collaboration that exist between the Assembly and its Stakeholders. I am sure this has culminated in the kind of development we are all witnessing in the Obuasi Municipality. I urge you to continue to work together to uphold the level of development here".

Hon. Ntim expressed worry over the low patronage of COVID-19 vaccine in the Municipality, a situation he said can be corrected if the Health Directorate intensify public education and sensitization about the vaccine.

The Municipal Chief Executive for Obuasi Honorable Elijah Adansi-Bonah underscored the importance of the flagship programmes introduced by the government. He said through the collaboration of Heads of Department and Nananom, the interventions by government has been successfully implemented in the Obuasi Municipality.

There was a power point presentation on key sectors of the economy such as Agriculture, Health and Education by the MOFA Director, Health and the Education Directors respectively.

Nananom, Heads of Department and Assembly members were all present.