Kenya's 'mama mboga' pinning their hopes on the future president 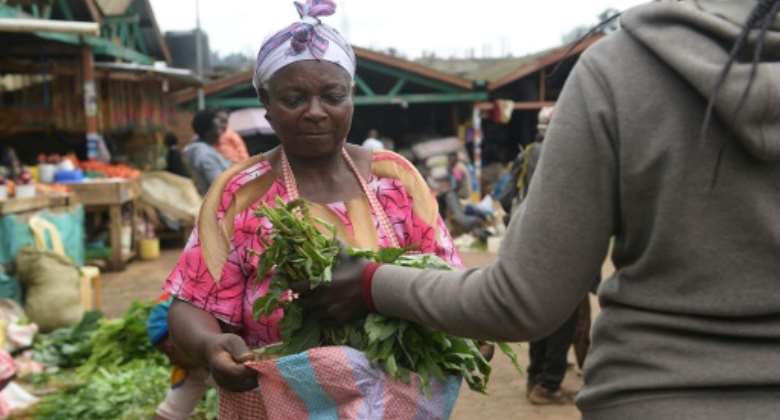 Agneta Ambane says she has been selling vegetables since she was eight. By Simon MAINA (AFP)

Behind her makeshift stall in the Kenyan town of Eldoret, just a blue plastic sheet on the ground strewn with bunches of spinach and kale leaves, Agneta Muhonja Ambane's face is etched with fatigue.

The 68-year-old grandmother did not go home last night, fearing she would run into her landlord demanding rent that she can no longer afford to pay.

She says she preferred to spend the night out in the cold in a corner of the market in the Rift Valley town.

Ambane is a "mama mboga" ("mama vegetable" in Swahili), a term used for the women vendors found everywhere in markets or on roadsides across Kenya.

They sell small quantities of fruit, vegetables, beans or fried fish to eke out a living for their families.

Ambane has been selling vegetables since she was just eight years old.

"Now, life is hard, the cost of living is too high," she sighs.

Street vendors known as 'mama mboga' are found in markets and on roadsides across Kenya. By Simon MAINA (AFP)

Its economy already hammered by the Covid pandemic, Kenya now is suffering from skyrocketing prices for essential goods caused by the fallout from war in Ukraine.

Inflation hit 8.3 percent in July, the highest in five years, and the struggle of ordinary Kenyans to make ends meet was a hot-button issue in Tuesday's election.

After casting their ballots, Eldoret's "mama mboga" now hope Kenya's new leader -- whoever it may be -- will stick to the bold promises made on the hustings.

Deputy President William Ruto, who was born in a village not far from Eldoret and is one of the two presidential frontrunners, has styled himself as the champion of "hustlers" struggling to make ends meet.

His rival Raila Odinga, the veteran opposition leader now backed by his longtime foe, the outgoing President Uhuru Kenyatta, has also pledged to improve the lot of the ordinary Kenyan.

For the "mama mboga" of Eldoret, the situation is desperate, their customers now increasingly scarce.

Ambane, who has 27 grandchildren, says her already meagre income is dwindling further.

Agneta Ambane says she can't support her family on her meagre income. By Simon MAINA (AFP)

"Sometimes, you make a profit of only 100 shillings (about 84 cents) in a day, what are you going to buy with 100 shillings?" she says, her arms crossed over her orange-checkered apron.

"Do you think it's possible to support my whole family with these vegetables? It's not possible."

She breaks off as a customer asks for the price of spinach. A few words are exchanged and the woman leaves without buying.

At the end of a nearby street, Julia Chepchirchir says she has no choice but to sell her goods at a loss.

"Since Covid came, our business went down. We hope that after the elections everything will be good," says the 40-year-old single mother, her hair wrapped up in a pink scarf.

"Business is hard, we are trying to sell but people are not buying, money isn't circulating. We sell but without profit.

Chepchirchir, who lives with her children aged 20, 18 and 14, says she has had to change her diet and no longer eats ugali, the Kenyan staple dish made from maize flour.

"Maize flour is too expensive, I am forced to eat rice and potatoes."

"We are just eating vegetables, but we can't afford tomatoes because they're too expensive. Sugar, soap, maize flour, everything has gone up."

"We need assistance from the government, we have to pay school fees, the rent, even some of our kids have become street children."

More and more Kenyans are angry at the political elite for failing to live up to their promises to help the "mwananchi", the grassroots citizen.

For some, this disenchantment was reflected in the relatively low election turnout of about 65 percent among Kenya's 22 million voters.

While Kenya is one of Africa's most dynamic economies, one third of the population lives in poverty and about 80 percent of the workforce is in the informal sector.

But, says Yeno, "we have no choice but to hope".

"If it goes on like this, old women like me will die because of the cost of living and the stress that comes with it," she says.

"Sometimes, I even think it's better that I die and rest. This is not the way a human being should live. And there are so many people going through the same thing."