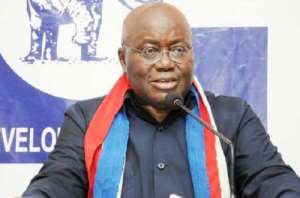 A Political Science lecturer at the University of Cape Coast, Jonathan Asante Okyere has opined that it will be impossible for the New Patriotic Party (NPP) to stay in government after the 2024 general elections.

Speaking to Kasapa FM in an interview, the UCC Lecturer stressed that the NPP will lose power in the next election because of the behaviour of President Nana Addo Dankwa Akufo-Addo.

According to Jonathan Asante Okyere, President Akufo-Addo’s decision not to listen to advise will send the ruling party into opposition.

“The President listens to only himself, he should be more accommodative and listen to advise from other well-meaning people. If you really want to break the 8 as the NPP is bent on doing and you are not even listening to Civil Society, then you have a problem. Because these are the people who control the middle class.

“Under this Fourth Republic, it is only under the NPP government that we have supporters in its stronghold always holding press conferences to complain of neglect. This is a very bad omen for the party,” Jonathan Asante Okyere shared.

The UCC Political Science Lecturer continued, “I will not mince words, the NPP cannot break the 8 with such behavior from the President. The very people he has to listen to, are the very people that he’s rather condemning and ridiculing and they will show you where power lies.”

Despite several calls for President Akufo-Addo to reshuffle appointees in his government, he said that will not happen.

Speaking to North Star Radio in an interview on Monday, August 8, the President said the NDC is fueling the calls for a reshuffle just to destabilise his government.

“If the output measures expectations, then I don’t have any strong reasons to heed the call. The calls come for all kinds of reasons; NDC wanting to destabilise the government is one. There are people who are also looking for jobs,” President Nana Addo Dankwa Akufo-Addo noted.

More from Headlines
ModernGhana Links
My wealth exaggerated; it’s crass to define me by my wealth – Sam Jonah
Council of State members blamed for humiliation of Akufo-Addo at the Global Citizens Festival
I’m committed to improving the development of the girl child – Akufo-Addo
TOP STORIES