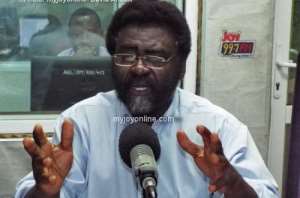 A staunch member of the ruling New Patriotic Party (NPP), Dr. Amoako Baah has added his voice to the heightened calls for a ministerial reshuffle in President Akufo-Addo’s government.

He said the party has a lot of men with rich experience even more than the current "underperforming" ones in government.

With that, he urged President Akufo-Addo to rope in such party members to help restore the economy.

Speaking on the Accra-based TV3’s News 360 on Monday, August 8, Dr Amoako Baah noted, “This is not about me seeking for jobs or for anything, there are so many people, people have aspirations, you put this one there for two or three years, bring somebody else, not necessarily fire the other one and there will be instances where you will see the new person performing better. But if you don’t give anybody the chance how are you going to see that?”

Dr. Amoako Baah stated that his frequent advocacy for reshuffle should not be misconstrued as his desire for an appointment by the President—though he is always willing to assist the President, not as an appointee.

“It is good for your party too, you have soo many people so why are you not looking at any other body. I am not talking for myself, because I have said it, if the President asks me for help, I will do but if he gives me an appointment I won’t take. If he says I should come and help him to do something I will do that but not appointment,” he said.

He was speaking about President Akufo-Addo’s recent rejection of ministerial reshuffling when granting an interview to North Star Radio in Tamale on Monday, August 8.

The president explained that those making the calls are opposition NDC members who are attempting to destabilize his government.