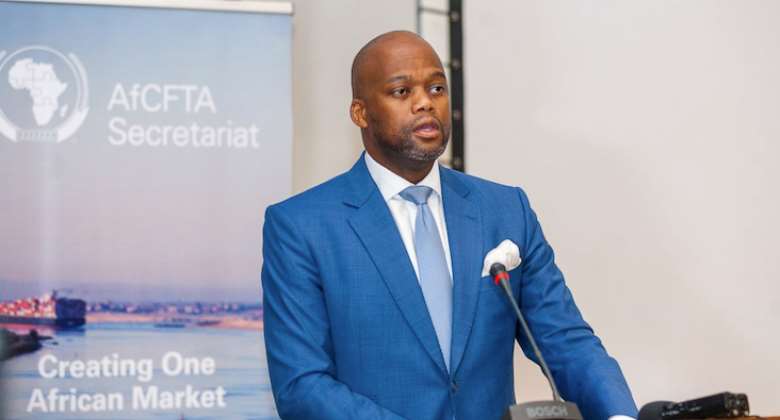 Ghana and other African countries have been charged to urgently domesticate the provisions of the African Continental Free Trade Area, (AfCFTA) treaty to fast-track the continent's economic progress.

Secretary-General of the AfCFT, Mr. Wamkele Mene made the call at the maiden edition of the Ghana Trade Policy Enlightenment Summit for Foreigners, GaTPES2022, on Thursday, August 4, 2022, at the National Theatre, Accra.

GaTPES2022, which was held under the theme 'Helping Foreign Businesses to better Navigate the Trade Policy Landscape', was organised by Ghana's premier travels company, Standard Travel and Tour, STT.

It had the endorsements of the GIPC, RGD, Lands Commission, GRA, FDA, Office of the Speaker of Parliament and the AfCFTA headquarters with support from Fine-Prints Limited, Eddu Motors and the Ezeigbo Ghana Foundation, among others

Mene urged state parties to the AfCFTA agreement to use its provision to build their economies and transform lives.

Echoing the same sentiment in his address, the Speaker of Ghana's Parliament, Right Honourable Alban Bagbin, assured of legislative support of the Parliament of Ghana to make the AfCFTA and the goal of greater intra-African trade a reality.

"The AfCFTA has come to stay," he assured.

Mr. Mene was represented by Mrs. Beatrice Chaytor, head of trade in services division at the AfCFTA headquarters; while Mr. Bagbin was represented by chairman of the house committee on trade and tourism, and member representing Tema West, Hon. Carlos Kingsley Ahenkorah.

According to Mene, "AfCFTA brings together 1.3 billion people on the African continent. It also brings together the various economic communities. It equally ensures that there are economies of scale. It essentially takes previously small fragmented economies and creates a single African market for trade in goods and trade in services. Additionally, (AfCFTA) will bring together other areas of the economy, such as investments, intellectual property rights, and competition.

"There are other legal instruments, called annexes that provide for customs cooperation, technical standards, sanitary standards, rules of origin. Rules of origin help to ensure that only qualifying goods that are made in Africa benefit from the preferences under the AfCFTA agreement. It will also include trade remedies, transit, trade facilitation. And all of these will help to ease the process of doing business in Africa. It will bring down the cost of trade transactions and streamline processes for the business community. Under trade in services, the first round of trade liberalisation will open up services such as business services, telecom, financial services, transport and tourism.

"In the second round, we will cover the remaining seven service areas, such as construction, education, health, energy-related services, etc. Now, we are in the final stages of negotiations between the state-parties to the agreement. And each country is then obliged to implement the provisions of the agreement. They must publish the laws or regulations in a prominent place, for instance in their official gazette or the internet, to ensure there is transparency. And the business community will then make use of these laws in order to transact business. So, in addition to the AfCFTA legal instruments, we also have supporting measures, such as the Pan-African Payment System. This Pan-African Payment System is the collaboration between the AfCFTA secretariat, the African Union Commission and the African Export-Import Bank, Afrexim Bank. That will enable any business person to pay for goods and services in a local currency, and those local currencies will then be convertible into the local currencies of another.

"For instance, you are a business person in Ghana, and you want to transact business with a supplier in Burkina Faso or in Angola, you pay with your cedi, and the person in Angola receives in peso while the person in Burkina Faso receives in CFA franc. What I want to leave with you is that this AfCFTA is a tool for business, because trade is a developmental tool. It's not just to be sitting in the statute books of your country. Effectively, the agreement, which is the treaty, needs to be translated into laws; and those laws are then used by the business person in order to do business, and to put money in the pockets of the business person, and put money into the economy of the public at large. You must use the provisions of the AfCFTA, you must use the opening up of the markets to do your business across countries in order to build your economies and to further your economic progress and transform lives."

The summit, which intends to hold annually, aims to boost foreign investors' confidence in Ghana's economy.

Against the backdrop of sporadic spates of local business-foreign business tensions in Ghana which tend to give Ghana a bad international image, the event brought together under one roof state agencies responsible for implementing Ghana's trade policy and laws as well as members of the foreign business community in the country to foster better understanding, to help repair the damage done to Ghana's image; and, to help vitiate Ghana's present economic difficulties that has necessitated the country's recent return to the IMF.

Additional to the Ministry of Trade and Industry, MOTI, other partners to the event are the Ghana Investments Promotion Center, GIPC; Registrar-General's Department, RGD; Food and Drugs Authority, FDA; Lands Commission; Ghana Prisons Service; Office of the Speaker of Parliament; and the Africa Continental Free Trade Area, (AfCFTA) headquarters, among others.

Specific presentations were made by Mrs Jemimah Oware, Registrar-General of the Registrar-General's Department; Mr.Victor Akogo, deputy commissioner-general and head of compliance of the Ghana Revenue Authority, GRA; Dr. Benjamin Armah Quaye, head of the special projects unit at the Lands Commission, Ms. Evelyn Nyarko of the Ghana Investments Promotion Centre, among others.

Diplomats who participated in the event include the ambassador of Suriname, Ms. Fidelia Graand-Galon; Ambassador of Colombia; charge d'affaires of Namibia, Ms. Evilene Hansen, as well as the trade secretary of the Iranian embassy in Ghana, Mr. Hussain Barharmi.

Foreign communities that attended the event include the Indian, Lebanese, Chinese, and Nigerian communities, among other segments of the international community in Ghana.

Other dignitaries also present were Eze (Dr) Chuks Jude Ihenetu, the Ezeigbo, or king of the Igbo community (of Nigeria) in Ghana, among other cultural leaders.