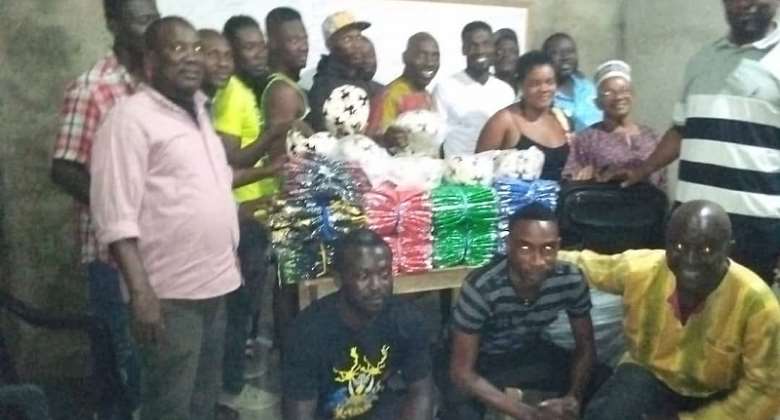 The Member of Parliament for Ablekuma Central in the Greater Accra Region, Hon. Abdul Latif Dan, on Friday presented 12 sets of jerseys, footballs and sound system to support the upcoming community league competition.

Making the presentation on behalf of the MP, Alhaji Mohammed Ashkar expressed the hope that the donation would go a long way to make the community football league a very exciting one.

Alhaji Ashkar used the opportunity to advise the youth to abstain from any form of acts that may have negative effects on their careers.

He also advised the youth to make training a priority.

He further appealed to coaches of the various community clubs to also show interest in bringing out the talents in the youth.

Hon. Gambo Wangabi also called on the participating clubs to train hard and be disciplined on the field. He added that, discipline will lead them to achieve their goals and become professional footballers in the near future.

Receiving the items on behalf of the various teams, Mr. Frank Ocloo, Alhaji Sadiq also known as Sly and Mr. Yaw Serwonu expressed their profound gratitude to the MP for the kind gesture and appealed for more of such support.

They promised to use the items for the intended purpose so as to build the talents of the community youth in sporting activities.