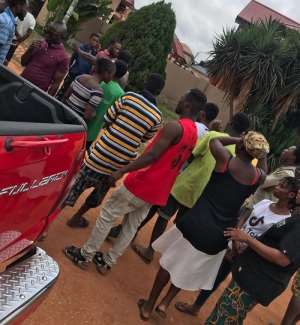 Trouble is brewing at Abuakwa Kokoben in the Atwima Nwabiagya Municipality of the Ashanti Region following an attack by residents on the Police station.

Angry residents on Friday, August 5, stormed the Police station to protest the death of one of the residents said to have died while in police cell.

The residents marched through the streets of Abuakwa Kokoben as they accused police of assaulting the deceased identified as Prince Salasi.

The deceased is said to have died overnight after he was allegedly manhandled by officers.

The deceased is said to have gone to the police station for the release of workers of a metal container he was building along the road to be used for a shop when an altercation occurred.

Reports indicate that the deceased was beaten to pulp by two Police officers when he resisted arrest.

“The police insisted on arresting him but he resisted and left the station. Shortly after he crossed the street, the two officers whom we know as Obroni and Acquay raised an alarm that the guy was a thief. Other officers rushed on him and began beating him till they brought him to the station.

“A sister of the deceased came to meet him in a bad state when she visited to provide him some food. Later in the night, they brought him out dead prompting the action of the townsfolk,” an eyewitness Isifu Ali told Ultimate News in an interview.

Before the angry residents attacked the Police station, some beseeched the home of one of the Police officers in an attempt to deal with him for playing a role in the assault of the deceased.

In the heat of the protest, one of the rioting residents was knocked down by a Police vehicle.

The police have since called for reinforcement to maintain peace at Abuakwa Kokoben.