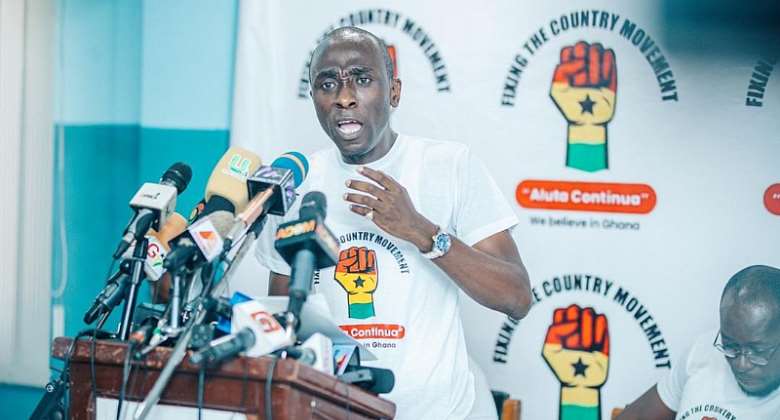 Ernest Kofi Owusu Bempah, Political Strategist and Convener of Fixing The Country Movement have admonished the National Communication Officer of the National Democratic Congress Sammy Gyamfi over his claim that the Akufo Addo government has managed the economy woefully.

According to the Owusu Bempah, available data points to the fact that before the two global misfortune Covid 19 and Ukraine and Russia War, the NPP government was doing better.

In a press release dated August 4th, 2022, Ernest Owusu Bempah emphasised that Akufo Addo's administration has done well to keep the economy from breaking down, unlike the Mahama administration which plunged the economy into a total disaster.

He noted that, despite the global economic crisis, the Akufo Addo-led administration has managed to achieve a 5% GDP.

*Below Is The Full Press Release*
For Immediate Release
Thursday, 4th August 2022
NPP are better managers of the economy than NDC – Owusu Bempah replies Sammy Gyamfi.

Having seen the clip of Sammy Gyamfi's latest press briefing with NDC members in the afternoon of Wednesday, 3rd August 2022, the NDC seem to be living in some kind of parallel universe, where roses still grow around the porch.

Indeed, the fantasy of regime change being offered by the NDC politicians who have been major figures in the wreckage Mahama caused this country is quite embarrassing.

It is in this light that the Fixing the Country Movement finds it baffling that Sammy Gyamfi is able to compare Mahama's abysmal performance to that of Akufo-Addo.

To all intent and purposes, a healthy democracy needs opposing views to be represented so that policies can be proposed and debated. We, the activists in the Fixing the country movement are all for having an adult conversation about the economy but then, these “shrink-the-state” ghouls in the NDC really boil our piss with their dishonesty.

The bloody trouble is that these NDC elements always claim they have all the answers to our economic woes - even though under Mahama, the economy plunged into a period of stagflation and a recession dealing a double blow to the country, with both consumer price and retail price indexes peaking close to 17.7 per cent in the last quarter of 2016. That was the chilling situation we were faced with under the Mahama administration.

On the other hand, amidst all the challenges faced by the NPP government, namely, the rising price of fuel on the global market and the exchange rate between the dollar and the cedi, as well as the global economic effect of Russia's invasion of Ukraine with their attendant effects on the country and the people, the NPP government has managed to achieve a 5% GDP.

It is true that much of the current happenings naturally reflect recent world events, the extent to which our economy itself is affected is a direct consequence of the last 8 years of the NDC's misgovernance. If I were a politician, much less one responsible for voting for Mahama in the last election, I would want to hide under a rock right now.

What we have here, with Sammy Gyamfi and the rest, are frogs in a box. Which is the maddest sight you can see with the naked eye.

Sammy Gyamfi, hang your head in shame. Mahama's NDC can't do any better. We know Mahama and what he is made of. We know what he did with the economy between 2012 - 2016.

As a common practice to many NDC folks, the total denial of objective truth serves to take the political intercourse out of any serious consideration. What becomes the substance of discussion becomes the contempt for actual reality and a need to address it. Whether it might be Mahama talking about a stolen election or Sammy Gyamfi talking of how the post-pandemic political-economic realities and the Ukraine/Russia war denial as having no correlation to our economic woes, a leader and his supporters show contempt for addressing the needs of the time.

The bitter truth here is that the overall picture that emerges from the careful examination of the performance of the Ghanaian economy from 2009 to 2016 and 2017 to date and compared the strength of NDC and NPP track records is that growth has been more stable during the NPP administration than the NDC.

The NDC cannot be better managers of the economy. The data clearly shows that the NPP administration has done better in tackling recessions and shows a more consistent economic performance. The NDC, by contrast, has always been the party that disproportionately presides over a shrinking economy.

The Mahama 'dumsor economy' is a point in case. In the 'dumsor economy' the entire nation was plunged into total darkness for 5 years, culminating in the collapse of businesses and industry.

We haven't forgotten about how the Mahama government wilfully misapplied a $175 million loan facility secured in 2012 which was to provide seven district hospitals. We also can't forget about the over GH200 million SADA funds invested in trees burnt down while guinea fowls mysteriously flew to nearby Burkina Faso without a trace.

How these NDC fanatics are able to put Akufo-Addo and Mahama in the same basket beats my imagination.

We're talking about the Akufo-Addo administration that has prudently introduced a series of far-reaching political reforms and policies inclusive of Planting for Food and Jobs, One District One Factory, Free SHS, and huge investment in infrastructure amongst others.

It goes without saying that before the Covid-19 pandemic, the Akufo-Addo administration managed to move Ghana’s economic growth from a disappointing 3.4% under Mahama to around 8%. Even with Covid-19 impacts and the Ukraine/Russia shockwaves, there are fiscal policy achievements, and it can only get better.

So, Sammy Gyamfi and the NDC should give us a break. Even when there was no Covid-19 pandemic and no global challenge like the Russian-Ukraine war, the then NDC government actually run the economy aground.