By Committee to Protect Journalists
Gambia 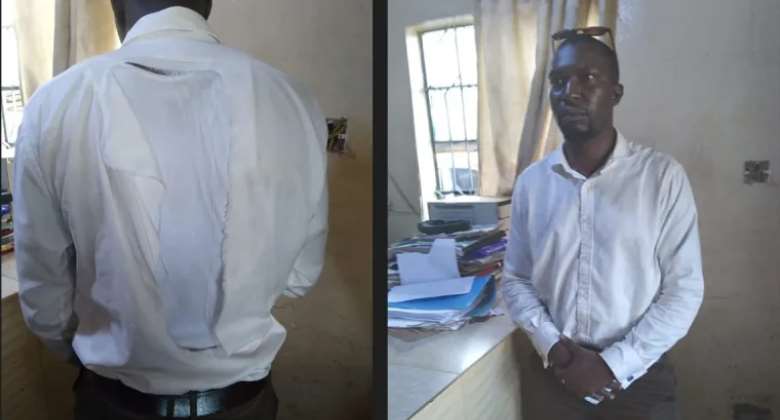 Police officers blocked Yusef Taylor, editor and manager of Gainako news website, from reporting about a land dispute on July 5, 2022. One officer grabbed Taylor, tearing his shirt as he dragged him into the police station, arrested and charged him with obstruction. (Photo: Yusef Taylor)

Gambian authorities should swiftly investigate and hold to account the police officers who harassed journalist Yusef Taylor, drop any charges against the journalist, and allow him to work freely, the Committee to Protect Journalists said Wednesday.

On July 5, police officers blocked Taylor, editor and manager of the privately owned Gainako news website, from reporting about a land dispute in Gambia’s West Coast region, and then arrested him and charged him with obstructing police, according to the journalist, who spoke to CPJ in a phone interview, and a statement by the local press freedom group Gambia Press Union.

On July 7, police summoned Taylor and said they would drop the charges, he said, adding that officers later requested Taylor report back to the station on four different occasions, and each time officers refused to clarify whether the charges had in fact been dropped.

CPJ was unable to determine whether Taylor still faces a criminal charge. If charged and convicted of obstructing police, he could face up to two years in prison, according to the Gambian criminal code .

“Authorities in Gambia must immediately drop any pending charges against journalist Yusef Taylor and stop harassing him,” said Angela Quintal, CPJ’s Africa program coordinator, from Durban, South Africa. “Journalists should never be detained for doing their jobs, and police officers should not be permitted to intimidate the press with impunity.”

On July 5, Taylor reported on his Facebook, where he uses the alias “Flex Dan” and has 630 followers and 4,900 friends, that a local court had ruled that a piece of disputed land belonged to the Global Hearts of Medical Mission, a local healthcare organization, and that, despite the ruling, several of its members were arrested for visiting the land and one was allegedly beaten by police.

Later that day, Taylor arrived at the Senegambia police station to report on the people arrested over that dispute and was taking photos when an officer stopped him and asked to see his press identification card, the journalist said.

After Taylor complied, the officer insisted he stop taking pictures, he told CPJ; when Taylor objected, explaining that he was only doing his job, five officers joined in shoving the journalist out of the station.

An officer then grabbed Taylor, tearing his shirt as he dragged him back to the station, arrested and charged him.

Police detained Taylor for four hours and released him following intervention by a representative of the Gambia Press Union and other local journalists, according to Taylor and the union’s statement.

Taylor said he reported his arrest and experience with the police to the Gambia Human Rights Commission (NHRC) on July 18, which assured him that it would investigate the matter.

When CPJ called the police officer whom Taylor said grabbed him and tore his shirt, the officer declined to give his full name and requested that CPJ visit his office in Gambia or speak with the police public relations officer. CPJ’s calls and text messages to Emmanuel Daniel Joof, commissioner and chair of the Gambia NHRC, and Lamin Njie, a public relations officer for the Gambian police, went unanswered.