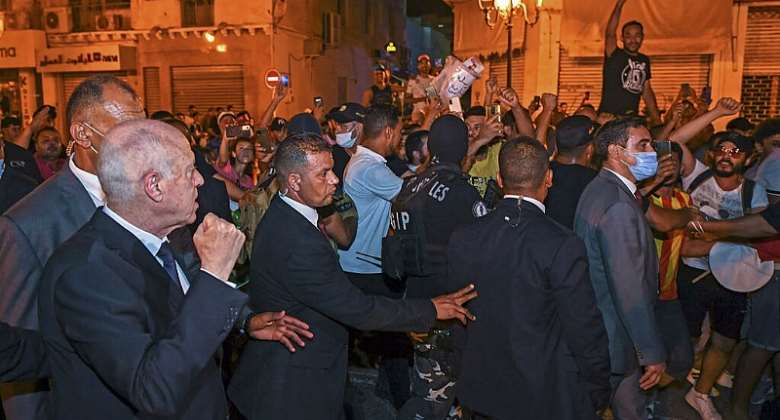 Tunisia has approved a new constitution granting sweeping powers to the office of President Kais Saied. Voters overwhelmingly backed the document, but less than a third of the population took part in the vote.

Tunisia's electoral board confirmed the results of Monday's referendum on the new draft constitution, with 94.6 percent of valid ballots in favour, on 30.5 percent turnout, it announced on Tuesday evening.

Most of Saied's rivals had called for a boycott, and while turnout was low, it was higher than the single figures many had expected.

The US State Department also said on Tuesday it noted "concerns that the new constitution includes weakened checks and balances that could compromise the protection of human rights and fundamental freedoms".

Saied, a 64-year-old law professor,  has already been ruling by decree since he dissolved parliament and seized control of the judiciary and the electoral commission on 25 July last year.

The new constitution gives the head of state full executive control, allowing Saied to appoint a government without parliamentary approval and makes him virtually impossible to remove from office.

But while his opponents say the moves aimed to install an autocracy more than a decade after the fall of dictator Zine El Abidine Ben Ali, his supporters say they were necessary after years of corruption and political turmoil.

"After 10 years of disappointment and total failure in the management of state and the economy, the Tunisian people wanted to get rid of the old and take a new step – whatever the results are," said Noureddine al-Rezgui, a bailiff.

As well as remaking the political system, Monday's vote was seen as a gauge of Saied's personal popularity, almost three years since he won by a landslide in Tunisia's first democratic direct presidential election.

The country is now set to hold parliamentary elections in December.

Until then, "Kais Saied will have more powers than a pharaoh, a Middle Ages Caliph or the [Ottoman-era] Bey of Tunis," said political scientist Hamadi Redissi.

E-Levy: Gov’t determined to behave like a vampire to suck th...
34 minutes ago

Gov’t will hide behind IMF discussions to force more hardshi...
34 minutes ago