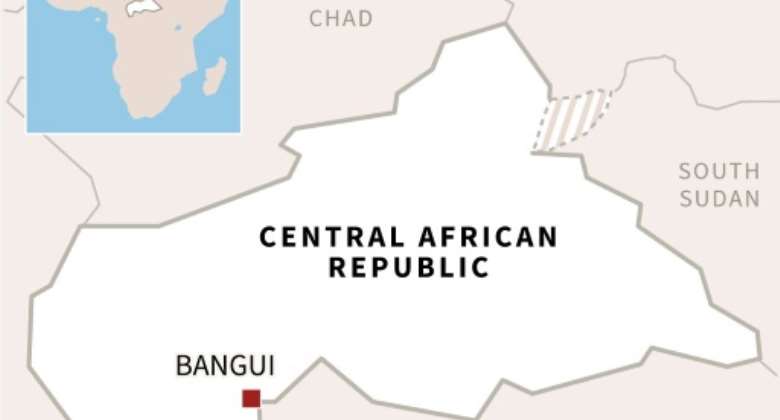 The massacre was reported in the south of the impoverished and war-torn country late last year. By (AFP)

The UN on Monday accused government forces in the Central African Republic of training militias and working with private military companies behind possible war crimes and crimes against humanity.

A fresh report published by the United Nations human rights office and its so-called Multidimensional Integrated Stabilization Mission in CAR (MINUSCA) detailed a massacre in Boyo village in the south of the impoverished and war-torn country late last year.

Machete-wielding militia members killed at least 20 civilians in the week-long attack, while five women and girls were raped and 547 houses were burned and looted.

More than 1,000 villagers were forced to flee, while hundreds of others were held for days in the village mosque as the militia members threatened to kill them, the report said.

The report said most of the attackers were former members of the mainly Christian and animalist militia known as Anti-Balaka, but that dozens of local young recruits, members of private security companies and government forces also took part.

The attack appeared to have been aimed at punishing the Muslim community in the village, which was perceived as supportive of an armed group engaged in fighting the government, it said.

The attack was one of the first instances when the government with private military companies "reportedly trained and armed locally recruited youth and created militias to enter villages under the control of armed groups", the UN rights office said in a statement.

Local recruits, trained and guided by the army and foreign private military contractors, used their knowledge of the area to reach the village and identify their victims, it added.

The attack, it said, confirms documented trends "where foreign private military contractors, operating under the direction or with the consent and acquiescence of the government, use proxies to perpetrate attacks on the civilian population".

The report concluded that the acts perpetrated in Boyo may constitute war crimes and crimes against humanity.

"The government must put an end to all violations, whether by its forces, affiliated pro-Government militias, or foreign private military contractors, and hold all those directly and indirectly involved to account."

In their official response to the report, CAR authorities insisted the UN allegations were "not corroborated by the evidence".

In a separate report, the UN rights office and MINUSCA also detailed systematic and widespread sexual violence by several armed groups affiliated with the Coalition of Patriots for Change (CPC), which has been seeking to overturn the government by force.

In regions that had come under CPC control, including Mbomou and Haute-Kotto prefectures, 245 women and girls had been victims of sexual violence between December 2020 and last March, the report said.

"Most of the victims, aged between eight and 55, were gang-raped," the rights office said, adding that some were "kept as sexual slaves and repeatedly raped for days on end".

"This unprecedented level of sexual violence in CAR is shocking and heart-breaking," Bachelet said.

"These atrocities are utterly unacceptable and must be brought to an end immediately."