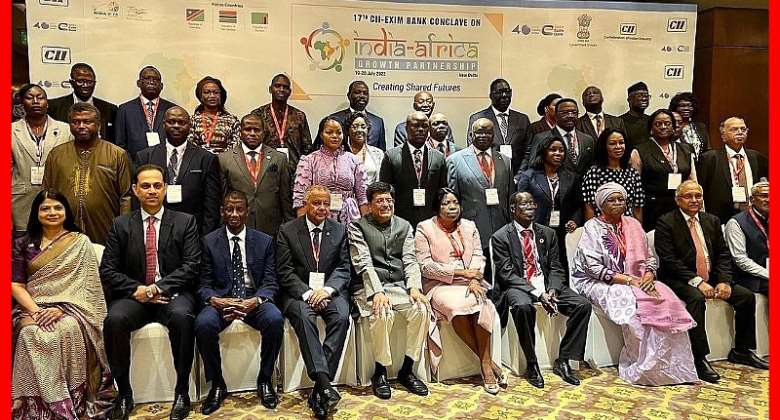 Africa has a combined GDP of over $2 trillion and a population base of more than 1 billion. With this consolidated GDP accompanied by a large market, Africa is slowly becoming an important stakeholder in different global platforms. However, in the backdrop of the Covid pandemic and the Russia-Ukraine war, the growth rate has subdued. Many small firms and industries in Africa desperately need financial access for survival. In the absence of adequate internal financing sources and receding interest from the traditional donors, it becomes imperative for India to step up and support the African continent in its hour of need.

As a matter of fact, even before the current crisis, the human resource of the continent was already underdeveloped. In the wake of the fourth industrial revolution, Africa still lags in skill development, and unless the catching up is rapid, they would again lose out in this upcoming new world order. Therefore, in order to reap the benefits of the fourth industrial revolution. Afican policymakers must undertake some sincere planning on an urgent basis and commit towards its implementation.

To prevent the continent's growth trajectory from getting derailed, African businesses and entrepreneurs need immediate investments. When it comes to small businesses and informal economies, the dual crisis has aggravated their struggle as they continue to scramble for access to additional funding. This additional funding will also be useful for professionalising their existing incubators and accelerators. However, the real challenge before the African policymakers and entrepreneurs is to develop some new funding sources.

As the impact of the COVID-19-induced pandemic is felt across the world, the funds from traditional donors are expected to dry up further. And now the concern is exacerbated due to the ensuing conflict between Russia and Ukraine. Despite being geographically far from the area, the spillover effect of the war and the economic sanctions will badly hit most African economies. As the current crisis increases the expense of importing oil and natural gas for use in industrial and agricultural output, African nations who are major oil importers will suffer and may further slip in their development agenda.

The food market in Africa had already been badly impacted by the post-pandemic demand for food, extreme weather, supply chain bottlenecks, and export restrictions. The majority of the African economy is already suffering from climate change and the Covid-19 outbreak. The Ukraine crisis will further slow their economic recovery, putting a long question mark on the time it would take to recover from the pandemic and go back to normal. As Russia and Ukraine are both major suppliers of grain (wheat) and fertiliser to Africa, achieving food security for all despite the increased food costs would likely be the biggest and most definite challenge for African policymakers.

Under this backdrop, the role of India in Africa's rebuilding effort could be crucial. Today, India is financing a growing number of development projects on the African continent through LOCs offered by the Export-Import Bank of India (Indian Exim Bank). Currently, Exim Bank has three representative offices in Africa located in South Africa, Ethiopia, and Cote d'Ivoire. So far, over 44 African nations have received an extension of about 200 LoCs worth about $12 billion till May 2021. There are currently $9.75 billion in operational Lines of Credit and an additional $2.2 billion in approved Pipelines.

In recent years, India has financed several important infrastructure projects in Africa. The power transmission and distribution networks in Cameroon, Ethiopia, Senegal, and Zambia; integrated LPG facilities at bitumen storage facilities in Mozambique; the supply of vehicles and spare parts to Cote d'Ivoire, Senegal, Tanzania, and Zimbabwe; the construction of a railway line in Ghana; the provision of blast hole drill and mining equipment to Zimbabwe and the city decongestion project in Zambia are some important African infrastructure projects supported by India. In addition, IT Centres, Science & Technology Parks and Entrepreneurship Development Centres (EDC) have been set up by India, contributing to its digital infrastructure.

Most recently, Indian Exim Bank has provided a US$100 million (Rs 730 crore) credit line to Africa Finance Corporation (AFC), the leading provider of infrastructure solutions on the continent. This financing will help African governments fund the construction of critical infrastructure, which is necessary to recover Africa's economies following the Covid-19 pandemic.

India is a member of the African Development Bank (AfDB) Group, another crucial stakeholder in Africa's development. These two banks work closely towards their shared goal: growth and prosperity for every African citizen. The latter has an ongoing programme that provides Indian businesses with various information, advisory, and support services to help them participate more effectively in projects sponsored by multilateral funding organisations like AfDB. Exim Bank and AfDB have also inked a co-financing agreement for several African projects. In 2017, AfDB held its annual meeting in Ahmedabad, Gujarat, underpinning the significance of India in its overall scheme of things.

Another avenue India is looking into to address capacity issues in Africa is triangular development cooperation. Examples include ISA and France, as well as AAGC and Japan. UAE recently indicated a desire to work with India to advance African development. African development initiatives can be financed using the model.

In order to bridge its infrastructure gap and promote sustainable economic growth, Africa urgently needs to organise the funds. India is a large federal democracy, and, in contrast to China, its development model suits the African needs more. Thus, despite many dissimilarities, India may be a practical partner in financing Africa's physical and digital infrastructure. As the continent begins to recover from the COVID-induced pandemic, India must respect its economic imperatives toward Africa, based on the changing nature of the world and consequent changing demand in Africa.