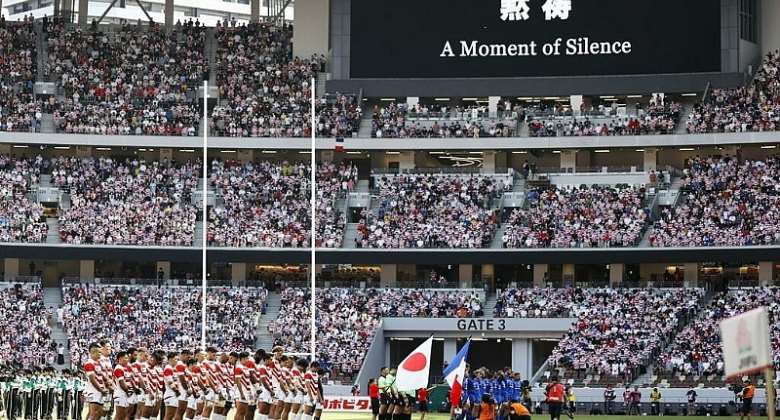 Six Nations champions France scored a late try to edge Japan 20-15 in an second rugby Test on Saturday. It was an emotional match, held at Tokyo's National Stadium the day after the country was shocked by the assassination of Shinzo Abe. A minute's silence was held for the former prime minister before kick-off.

Replacement scrum-half Baptiste Couilloud darted through a gap in the Japan defence to put France, who had trailed 15-7 at half-time, ahead and seal a 10th straight win for next year's World Cup hosts.

Tevita Tatafu had a late try disallowed to deny Japan a maiden victory over France with emotions still raw among the crowd of more than 57,000, a day after a gunman had shot and killed Japan's longest-serving prime minister on the campaign trail.

The home side hit back three minutes later when they collected the ball deep in their own territory and outfoxed France with a series of passes before full-back Ryohei Yamanaka went over for the try.

Japan pressed hard for another but had to be content with a penalty that fly-half Seungshin Lee slotted to put them ahead by a point.

The score looked like it would stay that way at half-time, until Yamanaka added a second try just before the hooter after another flowing Japan move.

A Maxime Lucu penalty shortly after the break reduced the deficit, and a crucial Ben Gunter tackle on France replacement Baptiste Couilloud on the line kept Japan ahead.

Matthieu Jalibert kicked a penalty to close the gap to two points with 20 minutes remaining, and Couilloud finally edged them in front 10 minutes later after streaking through the Japan defence to touch down.

Tatafu was then denied a try by a TMO review after rumbling over from a lineout with just five minutes left.

France swept the two-match series having beaten Japan 42-23 in the first Test in Toyota a week ago, scoring four tries in the second half after being held 13-13 at the break.

Come out and declare your commitment to fight against galams...
57 minutes ago