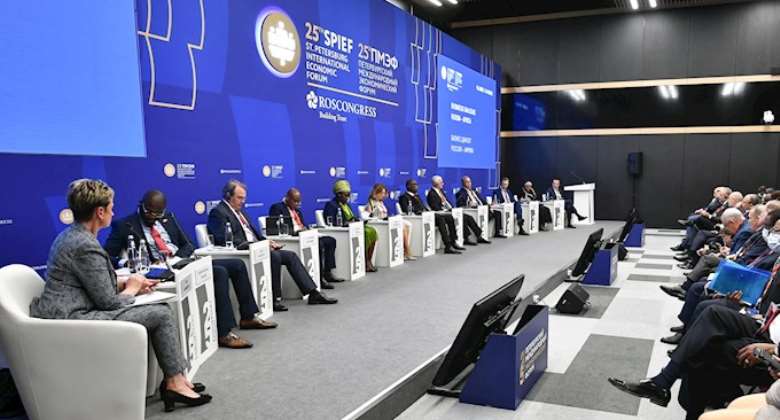 Moscow (Russia), June 21, CDA Consult – Russians have to consider seriously the mutual benefits while taking advantage of the African Continental Free Trade Area (AfCFTA), which was signed in March 2018, and came into force on January 1, 2021.

The AfCFTA provides a unique and valuable platform for businesses to access an integrated African market of over 1.3 billion people. The growing middle class, among other factors, constitutes a huge market potential in Africa.

In order to have an in-depth understanding of these, Russians must at least invest in initial market research and development (R&D) collaborations, as the basis for designing entry strategies, with their African partners.

The call was made at the Russia-Africa Business Dialogue held on June 16 at the 25th St. Petersburg International Economic Forum (SPIEF) with the participation of both top-level Russian and African officials, as captured by Kester Kenn Klomegah, Communication for Development and Advocacy Consult (CDA Consult) Special Correspondent in Moscow, Russia.

The Russia-Africa Business Dialogue was initiated in 2016 as a special platform to examine, review and discuss important topical issues especially those relating to trade and economic cooperation between Russia and Africa.

The forum which was on the theme: “New Opportunities in a New World,” was also used to reflect on the changing global situations. Over the last 24 years, the forum has become a leading global platform for members of the business community to meet and discuss the key economic issues facing Russia, emerging markets, and the world as a whole. Since 2006, it has been held under the auspices of the President of the Russian Federation.

The African delegates to the forum noted that by considering and accepting the opinions given by African speakers, Russians could be making the first practical step into the real business landscape there in Africa.

It is also important to take a comprehensive and broad-based look at emerging opportunities on the continent, study other foreign competitors who are already established in Africa.

According to the African Delegates, Russians need to rethink how better to engage with African policymakers, businesses, civil society, and the African diaspora in order to strengthen its strategic entrepreneurial relationships with Africa.

On the other hand, as Africa gets to the idea of building a new world order, it becomes also important for African leaders, their governments, and the public to ensure specific steps and approaches toward supporting the 1.3 billion people with needed public infrastructure and the economy, look forward to becoming continental self-dependent and develop the future for the next generation.

Lavrov reaffirmed that "in these difficult and crucial times the strategic partnership with Africa has become a priority of Russia's foreign policy. Russia highly appreciates the readiness of Africans to further step up economic cooperation."

Lavrov said: "It is in the interests of our peoples to work together to preserve and expand mutually beneficial trade and investment ties under these new conditions.

“It is important to facilitate the mutual access of Russian and African economic operators to each other's markets and encourage their participation in large-scale infrastructure projects. The signed agreements and the results will be consolidated at the forthcoming second Russia-Africa summit."

With the current changing geopolitical situation in the world, the consistent calls for new world order (multipolar system) and geopolitical rivalry, the top-level speakers gave an insight into economic opportunities, challenges and threats to both Russia and Africa. The speakers highlighted the prospects and possibilities of really transforming economic relationships between Russia and Africa.

Beyond that, the speakers and discussants noted the mutual interest in developing trade and economic ties between Russia and Africa, and identified food and energy security, new methods of financial settlements, cooperation in innovation and technology, health, education and culture, as well as cooperation within the integration alliances as priority areas.

Most of the discussions focused on the same questions that have been raised down the years, and in other different platforms. The key features here are that Russian officials reiterated their dreamy roadmap for cooperating with Africa, while African officials vividly narrated the existing nature and competitive conditions for investment in Africa.

In terms of investment African speakers attempt to lay out the potential sectors that are most in need of foreign corporate partners.

In terms of trade and industry, African speakers have loudly made it clear in their speeches the primary and long-term objectives, and several initiatives aimed at driving economic growth, industrialization, and development across Africa.

Professor Irina Abramova, Director of the Institute for African Studies of the Russian Academy of Sciences moderated the forum. It brought together representatives of government and business communities from both Russian and African sides.

Gilberto Da Piedade Verissimo, President of the Commission of the Economic Community of Central African States (ECCAS) participated. Delegations arrived from African countries such as Algeria, the Arab Republic of Egypt, the Republic of Mali, the Central African Republic, and Zimbabwe. There were also African diplomatic representatives.