The Enemy Within: Corruption In The Body Politic Of Ghana 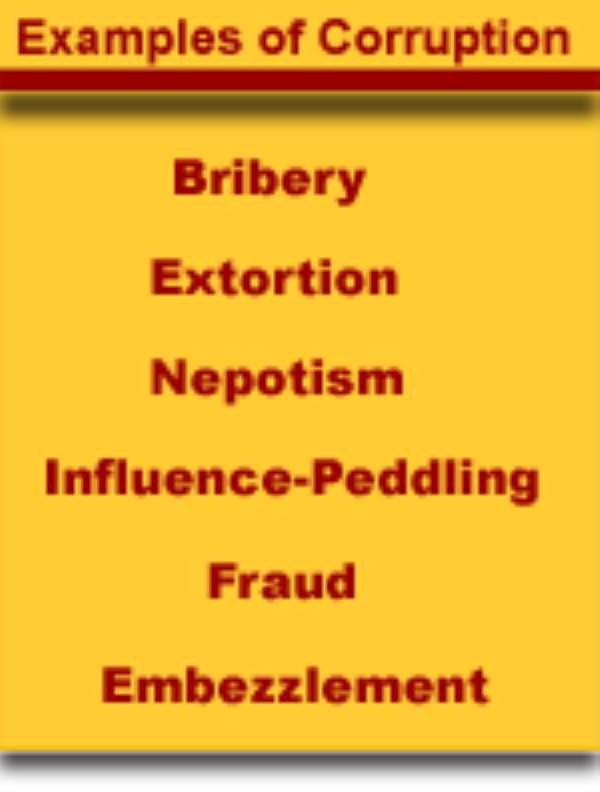 Imagine the GFA under Nyaho Tamakloe is in a mess. The President and the government are aware of the mismanagement going on. The Ministry of Sports and the sector Minister are aware of the problem, Ghanaians are aware of the problem but nobody was able to call this man to order. It took an outside body (FIFA) to call him to order and to order him to clean house. This is very embarrassing to say the least. Is it because Nyaho Tamakloe is an NPP guy (a former Greater Accra Regional Chairman of the Party) so nobody in government could call him to order? What kind of leadership do we have in Ghana now that closes its eyes to wrong doings on the part of party faithfuls, and members of government. A friend of mine recently remarked: The problem of GFA is symptomatic to the problems of Ghana as a whole and it will take an outside body to call Ghana to reform.

Just imagine a fine plan to clear the capital city Accra off garbage drawn by the Metropolitan Assembly and the District Chief Executive, sent to the Regional minister to incorporate into regional policy and implement it, and the Regional minister calls it illogical not based on content but just because the idea came from someone below him in authority. Crazy, you may say but that's the reality in today's Ghana and again nobody is calling him to order. The Chronicle rightly observed it its editorial “If a whole regional minister deems it illogical for a plan to be submitted by District Assemblies to be integrated into regional programmes for implementation, then we are in serious trouble. The truth about governance is that, the head is only representing the people and is not supposed to be the repository of all knowledge.” People in authority should have a humble attitude and be willing to listen and even solicit for ideas to improve and serve their communities better.

This President has demonstrated over and over again that he has no guts to fight corruption and mismanagement in government despite the lip service he pays to the “zero tolerance” policy. It looks like corruption in government is 100% tolerable. At least his ministers know and believe that. They believe the President has no anti corruption punch to deliver against any of them so they act with impunity and have no fear of the President's oversight powers. The President and his government must act to put its house in order. But of course, I don't expect this spineless and corrupt government to take any such measure. Another friend of mine recently wrote: “President Kuffuor doesn't want to step on any toes during his time in office. He has turned a blind eye to many wrong doings, including even the widespread revelations of corruption and money laundering which surfaced in the vettings of Edumadze and Anane. I used to root for Kuffuor because of my predisposition towards the Busia-Dankwa tradition coupled with my hatred for Rawlings. But I am disappointed by many things going on with this government. Not that I hate Rawlings any less now; but I like Kuffuor much less now.” The president has not exercised leadership and this is alienating many of his followers. A government which rode on widespread discontent with the political status quo into power has become one of the most corrupt and visionless governments this country has ever seen. Positive change has turned out to be negative in so many respects and continuing on the same negative path to self destruction. Graft and corruption in government is so endemic that it poses the single most dangerous security threat to the survival of our democracy and our country. Any adventurer will likely seize on it and get the support and sympathy of the masses. Democracy is threatened in a nation governed by corrupt, incompetent and arrogant bunch of politicians.

A look at the socio-political and economic environment in Ghana today reveals a horrifying picture. There is massive corruption, staggering poverty, unemployment, poor education, deteriorating infrastructure, and general degree of hopelessness among the youth who feel very disappointed and let down by their political leaders. According to the 2004 World Bank human development index, almost half of the national population live below the poverty line surviving on less than a dollar per day. The economic conditions felt by the ordinary Ghanaian are poorer than ever. Corruption stands in the way of Ghanaian development and we must do everything possible to combat this social menace. In a situation where resources for national development are few, any diversion of the limited resources made available for the benefit of all to private hands and pockets deprives millions of people from enjoying the benefits of development and condemns them to poverty. We need to develop real effective strategy to tackle not just pay lip service to the fight against corruption. The government's zero tolerance for corruption policy has been an embarrassing and dismal failure and the people must not be afraid to speak out against social injustice, corruption and ineptitude on the part of the government. In any state where there is an absence of a critical spirit in the attitude of the citizenry to their rulers, preservation of rights is a difficult matter and democracy suffers. The problem of social injustice has severely undermined social peace and political stability throughout history as various social groups which see themselves as victims have found ways to attack or change governments by force. This is a major threat to our democracy and we need to address it. The author is a Social and Political Analyst and also a Corporate Trainer based in Tokyo, Japan. He welcomes your comments and suggestions. Views expressed by the author(s) do not necessarily reflect those of GhanaHomePage.