World Environment Day marked in Obuasi with clean up exercise 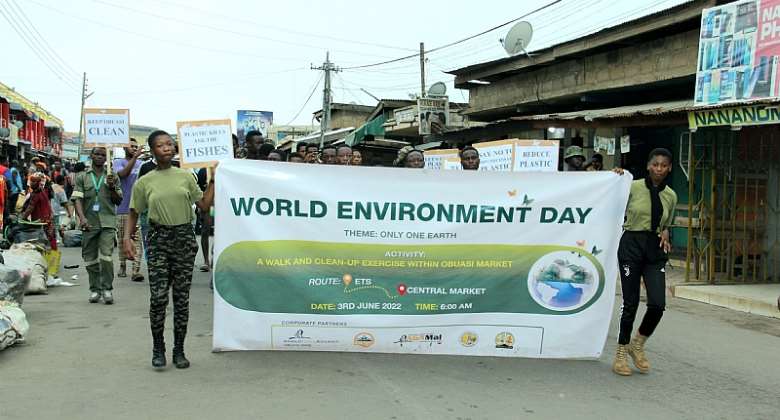 AngloGold Ashanti, Obuasi Mine has partnered the Environmental Protection Agency to organise a massive clean exercise in Obuasi to mark 2022 World Environment Day.

This year’s edition of World Environment Day was under the theme "Only one earth".

The clean-up exercise was preceded by a float through the principal streets of Obuasi with placards bearing inscriptions, 'Let's fight plastic pollution together, 'Reduce plastic use, ' We have only one earth, 'Plastic kills ask the fishes.'

Instituted in 1973, World Environment Day (WED) is celebrated annually on 5th June to create awareness for the protection of the environment.

Since its inception, it has been a platform for raising awareness on environmental issues such as marine pollution, overpopulation, global warming, sustainable consumption and wildlife crime.

Interacting with the media on the sidelines of the clean-up exercise, an Environment Superintendent with AngloGold Ashanti David Adade- Boateng said AngloGold Ashanti was committed to its value of respecting the environment and making the community better off because of AGAG’s presence hence conducting its operations in a sustainable and environmentally responsible manner.

He revealed that to demonstrate their commitment to a clean and healthy environment AngloGold Ashanti in partnership with the Malaria control program (AGAMAL) introduced the Keeping Obuasi Clean Campaign (K.O.C.C) in 2019. The campaign hinges on a monthly clean-up exercise, provision of waste bins at vantage places, sanitation education in schools and formation of sanitation clubs.

He admonished Ghanaians to own and be accountable for their immediate environment adding that this presents a panacea to environmental pollution.

Again, Mr. Adade- Boateng appealed to the Local Assembly to continue and strengthen strict enforcement of bye-laws on the Environment to ensure that offenders are properly dealt with. "We need to enhance the enforcement of environmental bye-laws to protect ourselves from environmental pollution, which is costing the nation a fortune and reducing the quality of our environment and impacting life expectancy of Ghanaians."

"Together with the good people of Ghana, we are advocating for drastic measures that can be implemented to offset or minimise the impact of some of these activities in the Environment ", he added.

Fuseina Imoro, the Obuasi Municipal Environmental Health officer encouraged Ghanaians to turn out in their numbers during clean up exercises.

She said though the Municipal Assembly has increased its public awareness drive to ensure a clean environment, it will strictly enforce its bye-laws to deal with those who pollute the environment.