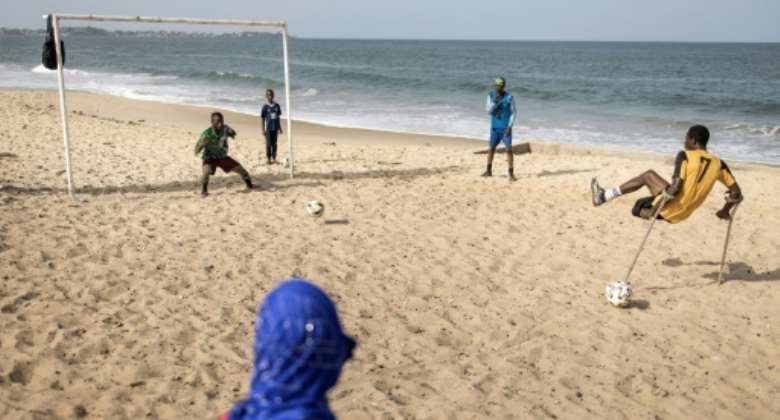 Sierra Leonean amputees have found a new lease of life through football. By JOHN WESSELS (AFP)

On a sun-drenched Sierra Leone beach, a one-legged man balances on his crutches and fires the ball past a one-armed goalkeeper.

Sheku Turay and others like him have found much-needed support and a new lease of life through his team of footballing amputees.

"Playing football makes me feel like an important person in society when I see spectators cheering us during matches," said 37-year-old Turay.

He was just 12 years old when rebels attacked his village in the northern Tonkolili district, during the civil war that left tens of thousands dead from 1991 to 2002.

Doctors sacrificed his leg to save him from gangrene.

Most of his teammates lost a leg or an arm during the war, while others had a limb amputated as a result of disease or a road accident.

Sheku Turay was just 12 when rebels attacked his village, leading to him losing his leg. By JOHN WESSELS (AFP)

Life is hard for the disabled in one of the world's poorest countries, where half the population lives on less than $1.25 a day according to the UN.

After a day's work as a tailor in a workshop in the sprawling Freetown suburb of Kamayama, Turay must struggle through piles of rocks and branches to his one-room hut on the mountainside, among the tin and cinderblock dwellings, carrying his prosthetic limb in a backpack.

Turay said he has never received any kind of aid from the government or charities, but is saving up to open his own shop.

"I don't depend on people for my survival like other disabled begging on the streets," he said proudly.

Sometimes memories of the war come back to haunt Turay in his sleep.

But playing football with the "Single Leg" association since 2012 on a stretch of the pristine Lumley Beach in the west end of Freetown, has given him "inspiration, strength and happiness".

There are 70 players involved in the "Single Leg" football association, including a dozen women. By JOHN WESSELS (AFP)

"The amputee football team help me to realise my sense of purpose in life," he explained.

There are a total of 70 players involved, including a dozen women, all missing an arm or a leg.

The club was created in 2002, at the end of the war, by Mamoudi Samai, pastor of a church he built in the district where Turay lives.

The pastor still manages and financially supports the team and its members.

A church pastor created the club in 2002 at the end of the civil war. By JOHN WESSELS (AFP)

He was shot by rebels in 1992. By the time he reached a hospital, he had lost so much blood one of his legs had to be amputated.

Makieu describes a tough daily life, with even taking a bus presenting a challenge.

"In my society the disabled are provoked and discriminated against, but it hasn't dampened my spirit to achieve my goals in life," he said.

"The government should open a special vocational training school and provide us with free medical and education as recommended by the 2004 Truth and Reconciliation Commission report," he added.

The Truth and Reconciliation Commission was set up to investigate the brutal conflict.

In 2004, it recommended that several categories of people affected by the war, including amputees, receive compensation.

Since then, of the 32,000 people who have registered for the compensation, 20,000 have received sums ranging from $70 to $200, according to the National Commission on Disability.

The centre, whose services are low-priced although not free, makes prostheses, but "we have a weak human resource capacity and lack of working materials at the workshop," bemoaned Dumbuya.

"Twenty years after the end of the war, some amputees feel worthless and there is nothing they can do for themselves," said pastor Samai.

But coach Makieu is not one of them.

Coach Lahai Makieu, 49, is about to marry his 28-year-old partner Zainab Turay, one of the female footballers. By JOHN WESSELS (AFP)

Disability "hasn't dampened my spirit to achieve my goals in life," he said with a broad smile.

He is about to marry his 28-year-old partner Zainab Turay, one of the female amputee footballers.

"God made me survive the war, so that I can marry her," he beamed.

Ejisu Roman Catholic School gets water closet for the first ...
49 minutes ago