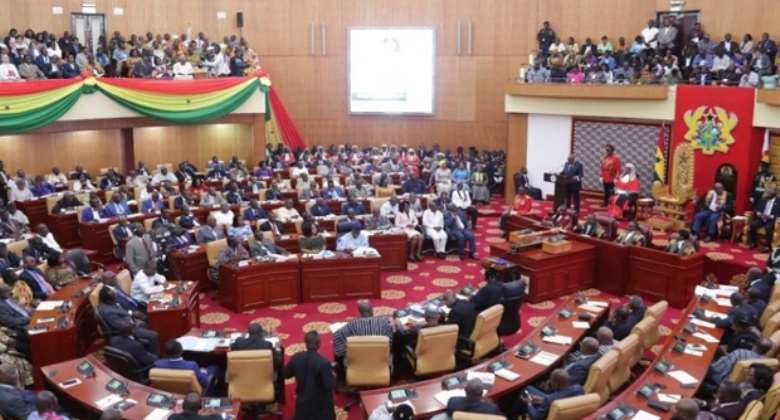 Parliament resumes today May 24 for the second meeting of the second session of the Eighth Parliament after taking an adjournment sine die [without a fixed date for resumption] in early April ahead of the Easter festivity.

“In pursuance of Standing Order 37 of the Parliament of Ghana, I, Alban Sumana Kingsford Bagbin, Speaker of Parliament, hereby give notice that the Second Meeting of the Second Session of the Eighth Parliament of the Fourth Republic shall commence on Tuesday, the 24th day of May, 2022 at ten o'clock in the forenoon at Parliament House, Accra,” public notice issued on May 9 said.

The resumption is coming under the shadow of the fallout of the passage of the E-Levy and the expected report of the parliamentary Privileges Committee on three of its own, who were asked by Speaker Alban Bagbin to appear before it to answer questions on their absence from the House for more than 15 sitting days without permission.

With the Committee of Privileges expected to give its report on Sarah Adwoa Safo of Dome Kwabenya, Henry Quartey of Ayawaso Central, and Kennedy Ohene Agyapong of the Assin Central, it is a very big week in Parliament, which could set the political tone for the coming months.

There will doubtless be some theatre around the committee's report, which will see the MPs belonging to the governing New Patriotic Party (NPP) and the opposition National Democratic Congress (NDC) clashing.

There were signals that attempts to depose all the three NPP MPs over delinquency would not be an easy parliamentary chore as both the Majority and Minority caucuses questioned the action of the Speaker.

The opening disagreement shows a bigger action is yet to come on the report of the Privileges Committee, which was tasked to sit while the House was in recess.

Speaker Bagbin, who made the referral, said evidence made available to him by the “table office indicates that three the Hon. Members have so far absented themselves in this meeting for more than 15 sitting days without permission as recorded in the Votes and Proceedings.”

“Consequently, as it's my understanding of the provisions of Article 97(1) (c) and Order 16(1) of the Standing Orders of Parliament and the decision of the Court of Appeal in the case of Prof. Stephen Kawaka Asare vs Attorney General and three others, I hereby refer the said Honourable Members to the Committee of Privileges for consideration and report to the House.”

He continued, “Since today (Tuesday) is the last sitting day of the meeting, I refer it to the committee and I expect that the committee will submit its report two weeks after the House reconvenes.”

“I trust that the Committee of Privileges will consider this matter with the urgency and seriousness it deserves, as the public interest in this matter is amazed. More importantly, we make the law and we must be seen to be obeying and complying with the laws we make,” he added.

The Speaker said the legislature has to set leadership by example and “I strongly believe this is one of the cases we must show commitment to what the people have elected us to do.”

He indicated that a search on the attendance of members from the commencement of the Eighth Parliament of the Fourth Republic conducted by the table office on the First Session was interesting and revealing, and said MPs needed to take the attendance to Parliament more seriously.

“The First Session of the House has already expired and unfortunately this issue of absenteeism was not addressed in any of the three meetings of that session. I consider that it will be improper,” he noted.

Hottest Photo Reports
Catch up with all the political quotes from our politicians.
Advertise here
More from Parliament
ModernGhana Links
This nicodemous attempt will not be countenanced, present contract on Ameri Plant relocation to Parliament for approval – Minority
Minority raise concerns over govt's alleged transfer of Ameri Power plant to Kumasi
Parliament passes Criminal and Other Offences Bill, 2021
TOP STORIES