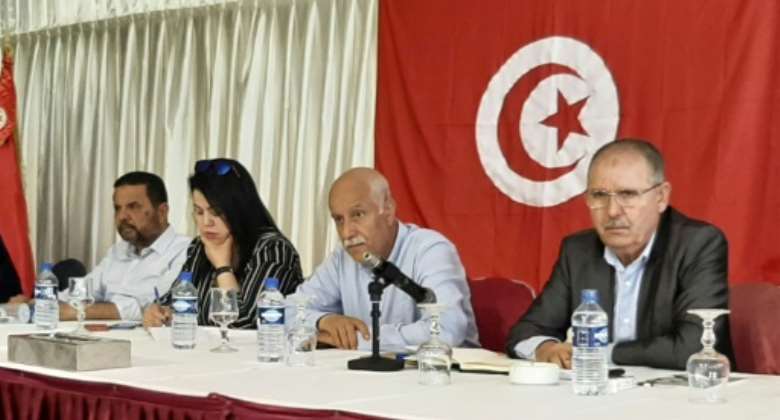 Noureddine Taboubi, on the right, the secretary-general of the Tunisian General Labour Union, chairs a meeting on May 23, 2022. By Khalil KSIBI (AFP)

Saied sacked the government last July before dissolving parliament and seizing control of the judiciary, in moves opponents called a coup against the only democracy to emerge from the Arab Spring uprisings.

The president has excluded political parties from any dialogue, despite domestic and overseas calls for a more inclusive process.

Saied had announced in early May the establishment of a long-awaited "national dialogue" -- at the same time attacking the political elite, which he accuses of having plundered the country.

On Friday, he appointed a loyalist law professor to head a body charged with rewriting the constitution, as well as the other bodies to take part -- including the UGTT, but excluding any political parties.

But in a statement on Monday, the union said it "will not take part in any national dialogue under the format proposed" by Saied.

Insisting that it supported dialogue as "the only way out of complex crisis facing the country", it said the proposed process was "rushed, with roles decided unilaterally and imposed from above", and that it excluded civil society.

UGTT chief Noureddine Taboubi said at a meeting of its executive committee that the proposed dialogue, which "ignores influential political actors" in the country "will not be able to resolve the crisis in the country or lay out a better future for it".

The UGTT was part of a national dialogue following two political assassinations that rocked the country just two years after the revolution.

The union and the other participants won the Nobel Peace Prize for their efforts, which led to the creation of a new technocratic government.

Saied's July 25 power grab was welcomed by many Tunisians tired of a frequently deadlocked post-revolutionary democracy.

But his opponents, including the Islamist-inspired Ennahdha party that has dominated the country's post-revolution politics, have warned of a return to autocracy.