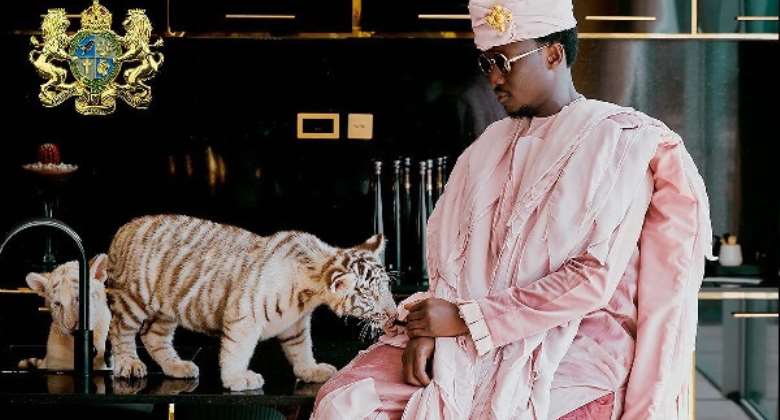 A former Public Relations Officer of the Wildlife Division of the Forestry Commission, Joseph Yaw Oppong has indicated that it is illegal for anyone to keep a tiger in their home in Ghana.

It follows confirmation that Ghanaian businessman, Nana Kwame Bediako, popularly known as Cheddar is keeping two tigers in his Wonder World Estates, Avenue Lincoln near the British High Commission at Ridge in Accra.

Speaking to Asaase FM on the back of complaints by neighbours of Cheddar who say they are living in fear, Joseph Yaw Oppong has provided clarity on whether anyone is allowed to keep a tiger in their homes.

According to him, only the Wildlife Division of the Forestry Commission has the authority to manage and cater to such wild animals.

He further explained, “In case there is a need for the use of any of such animals, the person has to apply through the Wildlife executive director through the Forestry Commission CEO and even to the President in some cases. It is the President who can give permission through these organisations for any of these animals to be used for the purpose of any function within the country.”

“So, no individual has the power to keep tiger, lion, leopard in the house. They are not animals that we entertain in Ghana here, and so if somebody is having a tiger in the house, then the person might have gone through all these processes, otherwise even going through the process Wildlife Division knows their job and they will not permit such an animal to be kept in any house.”

The Police as reported by Modernghana News in the morning, are collaborating with the Wildlife Division of the Forestry Commission to relocate the two tigers from Cheddar’s mansion to an appropriate location.