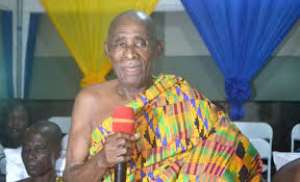 The Swedruman Council of Chiefs in the Agona West Municipality has officially announced the death of Swedruhene Nana Kobina Asiedu Botwe II who passed away in August 2021.

They have subsequently announced the 40 day remembrance of the late Chief on 16th of July 2022 from which date burial and funeral rites would be communicated to the general public.

At a press conference held at Agona Swedru last Wednesday, the Ninfahene of Agona Swedru, Nana Essieni V who also doubles as the Regent, noted that the late Chief who ruled for 53 years on the throne was installed in 1968 to succeed his late uncle Nana Kobina Botwe I.

According to Nana Essieni V, Nana Kobina Asiedu Botwe II was instrumental in the development of Agona Swedru township nothing some important projects he lobbied to the community.

"It was through Nana Kobina Asiedu Botwe II that we have the Central Regional Offices of the Ghana Cocobod. He laso played important role in the establishment of the Swedru School of Business (Swesbus).

"Others include the main lorry station, the Central Market as well as the Mandela Market. He was also played key role in the creation of Agona District Assembly now Agona West Municipal Assembly among others."

"Nana Essieni V called for unity with all hands on deck to ensure peaceful celebration of the late Chief who spent all his live seeking the welfare of his people.

"I want to announce that a week prior to the 40th Day remembrance and a week thereafter, no families would be allowed to hold funeral rites for their dead. This is to show respect for our late Chief who worked assiduously to raise the image of Agona Swedru township globally," he stated.

Nana Kobina Asiedu Botwe II died at the age of 76.

He left behind a wife, Botwe Esuah Agnes (Mrs) and 5 children made up of three girls and two boys.