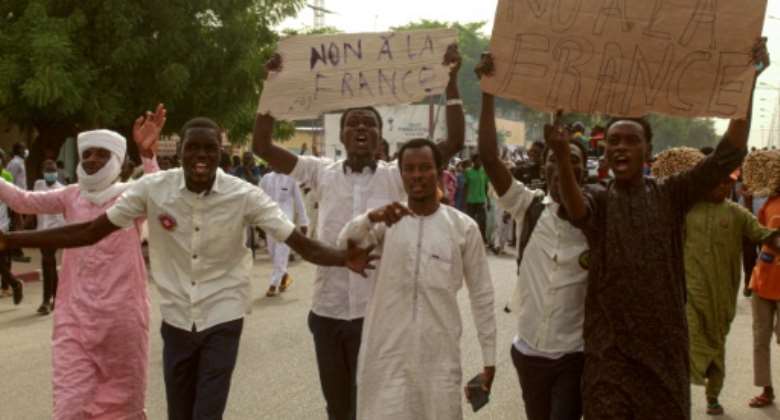 Hundreds of people demonstrated Saturday against France in the Chadian capital, accusing the former colonial power of supporting the country's military junta.

Two police officers were hurt in the violence, according to a fellow officer who asked to remain anonymous.

The authorities had given permission for the protest organised by the civil society platform Wakit Tamma Cette, but deployed a large police presence around the marchers.

The government later issued a statement saying "Chad's problems should remain strictly national ones and should be debated among Chadians."

It invited "all Chadians to join the inclusive dialogue process" paving the way for "free and democratic elections" following an 18-month transition period.

Communications Minister Abderaman Koulamallah also acknowledged "the international community and friendly countries like France for their constant support to the Chadian people during this transition".

"We are glad that Chadians are becoming more aware of our struggle and are joining us," Max Loalngar, a Wakit Tamma coordinator, told AFP.

"France installing dictators on our heads. We only ask that our people be respected."

His son Mahamat Idriss Deby Itno and a military junta seized control but he promised free elections this year.

He was swiftly supported by France, the European Union and the African Union -- powers that imposed sanctions on military men who carried out coups elsewhere in Africa -- mainly because Chad is a key player in the fight against jihadists in the Sahel.

Ahead of these elections, he had wanted a national dialogue to start on May 10.

Several hundred people demonstrated against the French presence in Chad,. By - (AFP)

Before that dialogue, the government and more than 40 opposition groups had sent delegations to Doha for preliminary talks.

But they spent much of the time in luxury hotels and had yet to meet face-to-face, as the Qatari mediators seek to establish enough common ground for the two sides to begin full talks.

Two weeks ago, the Chadian Foreign Ministry said it had agreed "to postpone the inclusive national dialogue to a later date to be decided, after consultations with the relevant institutions and political actors".

France then urged Chad to hold "without delay" the landmark national talks with opposition forces that have been postponed indefinitely.