Love among the ruins for Mobutu 25 years after his ouster 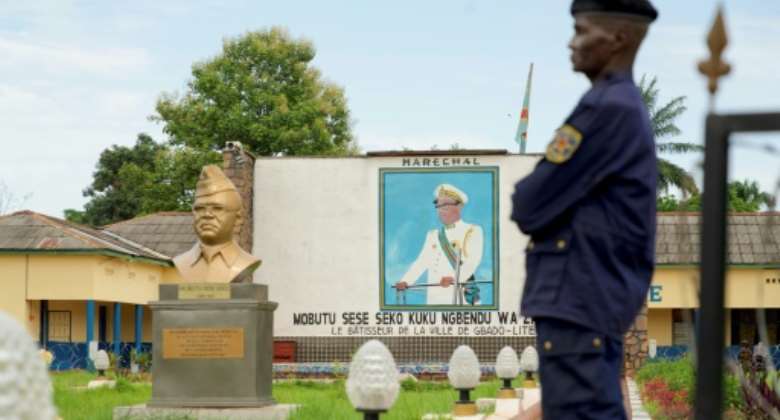 A monument to Mobutu, who spent his childhood in Gbadolite. By Junior KANNAH (AFP)

The northern DR Congo jungle now encroaches on a palace built by the late dictator Mobutu Sese Seko, who ruled the vast country with an iron fist for three decades before being ousted 25 years ago.

The Gbadolite palace, once dubbed "the Versailles of the Jungle," was an island of extreme opulence in its heydey, where world leaders dined in halls lined with Italian marble.

There were three palaces apart from a string of wildly opulent guest houses to host the world's rich and famous, Chinese pagodas and fake villages stocked with imported cattle as well as an airstrip to land a Concorde that Mobutu frequently used.

The complex boasted its own hydroelectric plant, peacocks strutted on the sprawling grounds and a fleet of Mercedes Benzes transpoted the guests who had come to party.

All that remains is a shell of a complex, its walls faded or in ruins, rooms bare and roofs missing -- a consequence of the mayhem that followed Mobutu's downfall on May 17, 1997, in the central African country.

Pierre Mokwe, a local guide and farmer, said thieves from nearby villages over the years snatched ironwork, pieces of marble and other material for building amid chaos resulting from "political and social crises".

Mokwe, 53, waxed nostalgic for the Mobutu years when he recalled "we lived well, there was enough to eat and we travelled without difficulty."

Mobutu ruled with an iron fist. By Eric Feferberg (AFP/File)

The Democratic Republic of Congo, a nation of about 90 million people, is one of the poorest countries in the world.

It has been devastated by a brutal colonial regime, as well as the predatory Mobutu era and the destructive series of wars that followed it.

Mobutu seized power in a coup in 1965 and developed a personalist dictatorship, accused of crushing political opponents and embezzling vast sums of money.

Mobutu was eventually overthrown by rebels led by Laurent Kabila at the end of the First Congo War in 1997, and exiled to Morocco where he died of prostate cancer shortly afterwards. His downfall precipitated the 1998-2003 Second Congo War.

Despite his controversial legacy, residents of Gbadolite city, about 15 kilometres (9 miles) from the ruined palace, continue to hold Mobutu in esteem. Mobutu spent his formative years there.

"The dictatorship had its bad side but also its good side. We respected the state, we respected the authorities," said Oscar Oshobale, the interim governor of North Ubangi province.

Local Bishop Dominique Bulamatari also praised Mobutu as a "visionary leader" who was ahead of his time.

Many locals still remember him fondly. By JOHN WESSELS (AFP/File)

"If he became a dictator, it is perhaps also our fault, we were asking a bit too much of him," he said, adding that he thought the country had gone backwards since Mobutu's overthrow.

There is little that directly recalls Mobutu in Gbadolite city apart from a small bust of his likeness, which features his signature leopard-skin cap.

But Gbadolite benefitted from infrastructure investments made under Mobutu's rule.

A power plant on the banks of the Ubangi river, which separates the DR Congo from the Central African Republic, supplies the city with constant power. Most other regional cities in the DRC suffer from poor electricity access.

A 40-kilometre (24-mile) network of asphalt roads built under Mobutu is also still in use in Gbadolite.

"I don't know if we will ever have a great leader like him here again," said Honore Ngusambia, a 23-year-old waiter born after Mobutu's downfall who nonetheless shares his elders' admiration for him.

But it was unpaid rebel soldiers who destroyed the buildings during the second war, he said, breaking them up and selling off parts.

Other nearby structures suffered similar fates, despite the apparent local fondness for Mobutu.

In 1978, the then dictator built the so-called Chapel of Mercy in Gbadolite city.

The building, decked in marble and gold, was the resting place of Mobutu's first wife Marie-Antoinette and three of his sons.

It has also been destroyed and its valuables stripped. Sacristan Jerome Yumbi said that the remains of Mobutu's relatives have also been reburied elsewhere.

"The tombs have been desecrated," he said.