Motherhood by choice and not by chance – Rev Agyeman 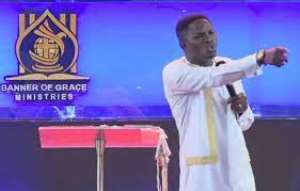 Motherhood is by choice and not by chance, the Reverend Franklin Emmanuel Agyeman, Senior Pastor of Banner of Grace Ministries, at Dawhenya Terrazzo Junction stated in a sermon on Sunday to mark the 2022 International Mother’s Day commemoration.

He, therefore, called on women to make a meaningful impact on others especially children by ensuring that they mentor them and help them to grow into responsible adults whether they belonged to them or not.

Rev. Agyeman said, every woman who wants to be a good mother must be someone with a good heart irrespective of whether they have biological children or not, the Communication for Development and Advocacy Consult (CDA Consult) gathered during the service.

The Banner of Grace Ministries Senior Pastor said there were several types of mothers that he grouped under perfectionist, best friend, me-first, and complete mothers among others.

Rev. Agyeman explained that some mothers want to be too perfect that they do not allow children to explore their childhood, a behavior he said needed to be checked to allow children to learn from their experiences when growing up.

He commended mothers who have made it a priority to make their children their best friends to build up a relationship that would make it easier for them to confide in her on their life issues and always go to her with their questions.

According to him, some mothers had also concentrated on buying things for themselves even when they do not need them at the expense of educating or providing the basic needs for their children, these women he called me-first-mothers.

Rev. Agyeman said all females were potential mothers, but it takes other factors to qualify as a mother stressing that, “what you do is what makes you a mother, some don’t have children but they have hearts of mothers just like Abigail in the Bible.”

He said one of the things that qualify women to be recognized as mothers was how they treated people well even when they have no relations with them.

As the world celebrates mother’s day on May 08 to honour mothers’ significance in the family and society, Rev Agyeman advised women to develop good hearts towards people to show their good motherliness.

“A mother must prioritize their children’s future instead of theirs, real and good mothers take care of their children and fight for their future,” he stated.

He said as a complete mother, a woman must be determined to not only care for their children but must also be a mother figure in the lives of their husbands by giving them all the respect.

Rev. Agyeman further encouraged today’s mothers to emulate the good mothers in the Bible such as Mary and Moses’ mother who he said have undying love which they exhibited by going through the challenges to protect their children.

He added that a mother such as biblical Hannah sacrificed for her son without thinking twice, a character he asked mothers to develop.