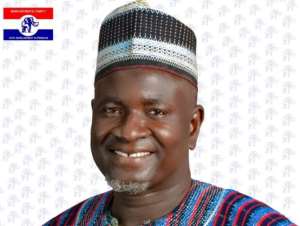 Maverick politician and regional chairman of the New Patriotic Party (NPP) for Savannah Region, Alhaji Iddrisu Sulemana popularly called Kalamonia has announced his intention to seek re-election as chairman when the party gives the green light for nominations.

His declaration message was contained in a statement copied to Modern Ghana News' Savannah Regional Correspondent.

According to him, he has made broader consultations with the delegates and grassroots of the party to arrive at the decision.

He stressed that he has demonstrated enough faith to the course of the party in the region and believed that the party has a greater chance of making the Savannah Region its world bank with his re-election.

He also noted that per his leadership and enormous experience in politics he will deliver beyond expectations if given the nod again.

He revealed that since taking charge of the party as regional chairman, the fortunes of the party has improved tremendously noting that the Savannah Region was the only region to increase its parliamentary seats by two in the 2020 elections.

He further stated that he will stand for a reform agenda that will place much focus on empowering the youth of the party to help consolidate the gains of the party in the region.

Fellow Patriots, after extensive consultation with my respected delegates, the grassroots of our great party and various stakeholders in the Region, I wish to humbly present myself once again to you honourable delegates of our region for re-election as Regional Chairman.

In 2019, I presented myself to you honourable delegates to elect me as the Regional Chairman of our great party, the NPP, and you gave me a resounding victory of 70.4% of the total valid votes cast.

Fellow Patriots, permit me to reminiscence the state of our party in the Savannah Region before I assumed office as Regional Chairman. In the 2012 Presidential election, the NPP had 54, 425 votes out of a total of 99,413 valid votes cast. This represented 34% of the total votes cast.

Fellow Patriots, upon assumption of office as Regional Chairman, within one and half years, we went to elections and came out with three solid seats. This was a result of the leadership we provided with the support of in you my respected Constituency Executives, Government Appointees and the grassroots of our party in the region. All of us worked very hard to change the narrative in a region that our President and then flag-bearer, Nana Addo Dankuah Akuffo-Addo, described as a “Lion Den” not just because it was considered as NDC strong hold, but the constituency of the NDC flag-bearer.

Fellow Patriots, the result of my leadership and hard work is that, our party garnered 80,605 votes out of a total of 229,085, representing 35.19% of the valid votes cast. As that was not enough, we increased our parliamentary seats from one (1) to three (3). This is, indeed, unprecedented in the history of our party in the region!!!

Fellow Patriots, it is an undeniable fact that my region is one and only one region that went beyond the expectations of many in our party. At various fora before the elections, this region was targeted below our current status by the National Party. But we worked against all odds to achieve our current feat.

Fellow Kukurudus and Kukurudites, let me put it on record that there was no region in the country that was able to increase its parliamentary seats by two constituencies in the 2020 elections except the Savannah Region. Fellow Kukurudus and Kukudites, it is for this many other reasons that I am seeking re-election to continue to lead this infant region to greater glories.

Fellow Patriots, in the area of employment, I assisted a number of our youth to gain employment into various state and private institutions.

The 2024 elections is not going to be business as usual. It will require someone who has been tried, tested and proven; someone who is decisive, selfless, hardworking, courageous and bold to lead our infant region so that we can consolidate our gains from the 2020 general elections.

I am counting on all of you to join hands to renew my mandate to do more for our great party and dear Region.