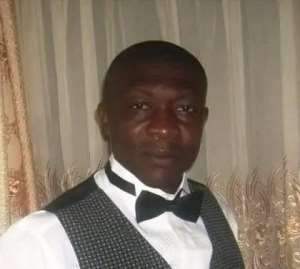 New York, May 3, 2022 – Cameroonian authorities should allow freelance journalist Kingsley Fomunyuy Njoka, who has been held in arbitrary detention without trial in Kondengui Central Prison in the capital Yaounde for almost two years, to leave prison on compassionate grounds to attend his father’s funeral on May 6, and should ensure that he and other jailed journalists are finally released so that they can live and work freely, the Committee to Protect Journalists said Tuesday.

Njoka’s father, Shey Rudolf Verla Njoka, died on April 25, and will be buried on Friday, May 6, in Kikaikom village in the restive English-speaking Northwest region, according to the journalist’s wife Venbatia Fai and his lawyer Amungwa Tanyi, who both spoke to CPJ via messaging app, and a May 2 handwritten letter, reviewed by CPJ, that Njoka wrote to prison authorities.

“As we mark World Press Freedom Day, the Committee to Protect Journalists again appeals to Cameroonian authorities to immediately free all the jailed journalists in the country, including Kingsley Njoka, who has been held in lengthy pre-trial detention,” said Angela Quintal, CPJ’s Africa program coordinator. “At the very least, Njoka, who is the eldest son in his family and has yet to be tried or convicted after nearly two years behind bars, should be allowed compassionate leave to mourn and bury his father.”

Njoka was arrested on May 15, 2020, and held in incommunicado detention until he was charged on June 11 with secession and complicity in an armed gang, according to CPJ’s research. He was suspected of managing pro-secessionist WhatsApp groups, including the Bui Warriors group based in Kumbo, an English-speaking town in the Northwest region that has experienced armed conflict between government forces and separatists seeking to create the independent state of Ambazonia, according to media reports. Four top prison officials were killed by separatists in Kumbo last month, according to Voice of America.

Cameroon is the fifth-worst jailer of journalists in Africa, with six journalists behind bars on December 1, 2021, according to CPJ’s annual prison census. One journalist, Emmanuel Mbombog Mbog Matip, has since been released.