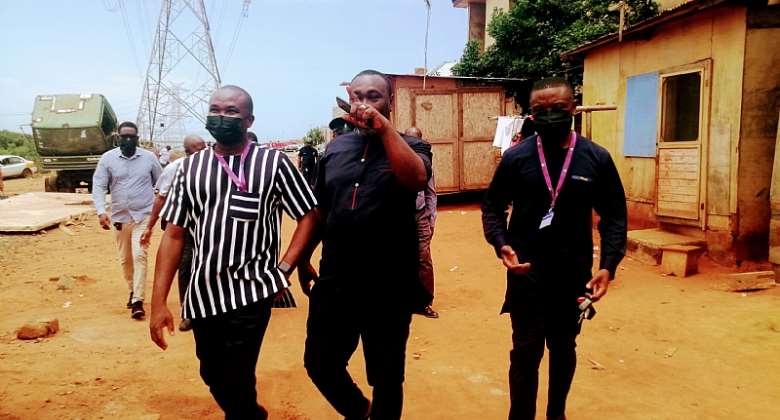 Mr Fletcher touring some of the places

Mr. Samuel Fletcher, Manager of Corporate Social Responsibility (CSR) of the Volta River Authority (VRA) has disclosed that the activities of mechanics, welders, and other artisan workers who operate within the VRA pathway pose a danger to the entire country should there be a blast.

Mr. Fletcher further added that the gas pipeline that aids in the supply of electricity to the public and for industrial purposes could be affected by the constant existence of the encroachers under the pylons.

He said the authority has, therefore, intensified efforts to evict the encroachers on its right of way within some Communities in Tema Newton, Kpone–Katamanso, and its adjoining communities.

This was disclosed during a stakeholder’s meeting held at the VRA Tema Thermal Power Complex (TTPC), which was monitored by the Communication for Development and Advocacy Consult (CDA Consult) at Kpone.

He added that the situation has become a National Security issue and needed to be tackled with some sense of urgency adding that the least mistake by the encroachers could spell doom for the entire country which could plunge the nation back to the days of Dumsor.

The VRA CSR Manager again hinted that it was the responsibility of the various key players in the energy sector to protect lives and properties and to ensure nothing impedes the supply of power for public and commercial consumption.

Mr. Fletcher again opined that the sensitization process to have the squatters and the mechanics relocate to different places began long ago saying that the compulsory eviction exercise could commence by May 2022 in Tema Newton and would be replicated in other communities where such hazardous activities have been identified.

Present at the meeting were heads of the various security services, representatives from the Traditional Authorities, officials from Tema Metropolitan Assembly (TMA), Kpone-Katamanso Municipal Assembly (KKMA) amongst some important dignitaries in the energy sector.