Doing it our own way, football made in Ghana 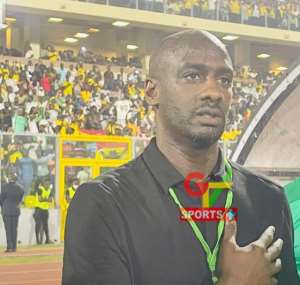 Ghana is one of the most popular football countries we have in Africa. A land rich in Gold and Cocoa, as well as many other minerals. A land of multi-talented and multi-gifted inhabitants who has so much passion for football. It is common to find supporters of the top clubs in Europe, wearing replica jerseys and cheering their teams during weekends or champions league evenings. Fans of local clubs aren't left out as they also troop to match venues to support their darling clubs or players. The love for the sport dates back to the 1960s when the first President, Dr Kwame Nkrumah invited the all-conquering Real Madrid team(featuring the great Di Stefano and Puskas) to play a friendly football match with The National Team(The Black Stars) which ended 3-3 in the Accra Sports Stadium. There are many Ghanaians including my humble self, who have joined the football business to complement the efforts of our premier, division and numerous colts clubs in the country. No wonder the number of footballers in Ghana is increasing at an increasing rate in recent years. Ghana is currently one of the countries in Africa with the highest number of footballers abroad.

When Ghana was drawn to play Nigeria in the world cup playoffs, all odds were against us. Both local and international media tipped Nigeria to come out with wagging tails. But some of us were resolute, taking inspiration from the previous tournaments our national teams have participated. We are always known to be slow starters, but will always end the tournament high because of our inborn bouncebackability spirit. I believed we will eliminate the Super Eagles, though we will sweat. History never favored Nigeria because in a total of 56 matches played, we won 25 and drew 19, whilst Nigeria won 12.

In the first match at Baba Yara Sports Stadium, Nigeria made their intentions clear they came for a draw. Armed with play-acting and time-wasting as their number one tactical approach, they planned to catch us on the break after gaining possession. With a target man striker (Osimhen at 1.85m tall) in their team, Ghana's defense had to mark him boot for boot, which Amartey and Djiku did with much excellence and elegance. They crushed him when they had sometimes, to tame him. Remarkably, they neutralize his aerial ability too.The resilient performances of Denis Odoi and Gideon Mensah thwarted the attacking prowess of Moses Simon and Samuel Chukwuzie who on paper were their safest bet to destabilize Ghana's defense. After they failed to score a goal at the Baba Yara Stadium, I knew they were out because they can't stop Ghana from scoring in the second leg . Wallowing in mediocrity was the state of mind of every football loving Nigerian because the fear of losing was clear after the final whistle was blown. This forced them to change tactics in the second leg at home.

Knowing that they had to be almost perfect to beat us at the Moshood Abiola Stadium in Abuja, the home side decided to go with players who could keep possession against direct players. I think they knew speed wasn't what they could outmatch the Black Stars with, hence the only way they could approach the game was to force us to make defensive errors, leading to set pieces. The Black Stars knowing very well they needed a goal to boost their qualification adopted a robust high pressing and quicker ball movement game from the first minute. They controlled the tempo of the game with Partey and Iddrisu spraying the passes. Jordan Ayew and Kudus were tasked with the creativity responsibility, which was near perfect in the first nine minutes of the game. Jordan held the ball to draw Gideon Mensah into play. Gideon then played a timely pass to Thomas Partey who unleashed a thunderbolt of a shot into the left bottom corner of the goalposts, passing through the body of the helpless Francis Uzoho into the net. It was a fantabulous strike by all standards. What a goal it was and what a great time it was to be a Ghanaian. There was a massive celebration everywhere in the stadium and people back home. About a couple of minutes later, the joy was cut short as the Super Eagles equalised through a penalty. The gallant stars still held on to qualify on away goals rule, eliminating their bitter sweet rivals. Coach Otto Addo and his boys brought back the love by qualifying for the World Cup? We will see when the World Cup begins in November. Ghana has been drawn with Portugal, Uruguay and Korea Republic in group F. We will go to the World Cup and our presence will be felt. We will entertain the world with Ghanaian soccer and heal wounds at home. We will cheer the boys but we demand better preparation and better results in the world cup to fully BRING BACK THE LOVE!!