A Tribute To Mubarak Bala 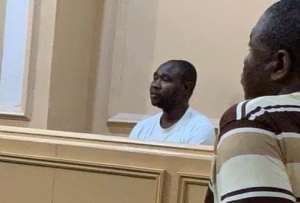 Your sentence today, April 5, 2022, for blasphemy in the 21st century by the Nigerian court will only weaken those who sentenced you when posterity reviews the reason you were sentenced.

You were charged not for terrorism, arson, or any other violation of Nigerian law, but for holding a different viewpoint on religion than the laid down views. You were sentenced to 24 years, having been unjustifiably detained in a remedial cell for around two years.

You are the leader of the Humanist Association of Nigeria and became a celebrity in 2020 following your capture by a section of the authorities for religious lewdness.

I read some online publications where you were quoted as having admitted you were guilty while being sentenced. Some people would say if you were not guilty of the charges, you wouldn't have done so.

But I see you as a peaceful man who wouldn't want to continue to delay your handlers, hence your current position, while at the same time not shying away from your stance on humanity.

They call you an atheist. In their definition of that word, it means someone who doesn't know the Abrahamic God, but you are one of the godliest people I have ever read about in my time. You were not disturbed by their human judgment on you.

You were brave and wanted to show them how a man could accept the supreme price of death without an iota of fear or regret. I would want to say that any person or organization that can't accept the evolution of the human mind is a true blasphemer.

Man was not meant for static theories and mantras. This is the reason I tell people, especially those of my Christian brothers and sisters, that Jesus knew he was God, but many people following him have refused to wake up and find out who they are.

You probably found who you were that resonated with your Inner Man just as Socrates of old found who he was and taught people, but the empires and emperors that were so against his teachings as heretics poisoned him with an opium called hemlock.

Galileo was also beheaded by the ruinous empires and emperors for removing the cobwebs that were in the people's eyes because they were following the Roman doctrines awkwardly. So, it is not new that there will continue to be human bondages against the enlightened minds of this world.

My goodness, there are people who want to be like you, but for fear of sharing in the fate you have chosen to face today. Such people who are hypnotized by fear of human laws against their innate qualities are truly the ones in perpetual prison. Yours in 24 years! It will also come to pass.

In our different localities, they want people to be lawyers, doctors, and so on, and the hierarchical leaders of those localities do not see people's choices of professions as blasphemy, but immediately one talks about religion different from the status quo, his head is called for.

While religious adherents are enmeshed in the doctrines of the proponents of those religions, one wonders why they are not, by religious rules, forced to be like their masters and operate within the ambit of their masters' professions.

You were blasted and misunderstood where you stood by trappers of the progressive human mind, but you knew your position wasn't in error, hence your admitting guilt.

There was no reason to spur you to pray for forgiveness other than a man who wanted to find himself free from what he was taught to believe in. While you pay for the private judgment of those possessed by religious brag, history will judge and vindicate you as someone who possessed conscience liberty and the right to free inquiry.

What does it mean to make a free request when, for example, a writer risks being fined or imprisoned for showing any contention for examination concerning the divine or political expert in a particular society? Be firm, Mubarak, and understand that blasphemy is a label applied to sound judgment by a wacky ideology.

It is distressing that men have been deeply tainted by religious and transitory biases from the dawn of time, and that they will never be able to rid themselves of them. They are completely polluted by religious ideology and declarations of faith.

The unwitting attitude that the average believer has toward religion is quirky and never-changing. He scorns the awakened mind for being a highbrow at one point and blames him at another for irreverently corrupting his religion at another. Nevertheless, when Mubarak Bala's name is spoken, he slips into a state of overwhelming devotion. When the believer takes a breath and thinks about it, he realizes that Mubarak has influenced the entire atmosphere of the world in which he lives.

A bit more in-depth thinking reveals that the philosophy of Mubarak's influence extends far further, coloring the entire mental outlook of today's acculturated man on the world. The accounts men have prepared in the Abrahamic God's name have upset him (God) because this God has never been able to influence sibling rivalries or persuade tribes to hold grudges against one another. This God does not prefer those who love him over those who despise him.

Certainly, the fear of the godly response that Mubarak's brand made certain to arouse made the prospect of participating in such procedures as blatant obstructive judgment appear to be both risky and ineffective. Maintain your composure, Mubarak Bala, while carrying out your sentence with less dread than when it was handed to you.

When everyone sees what you've seen today, the opportunity will present itself by tomorrow.

Hottest Photo Reports
Catch up with all the political quotes from our politicians.
Advertise here
More from Tributes & Condolences
ModernGhana Links
Tribute To Nana Baafour Osei Akoto by the Government of Ghana at the Funeral on Thursday, November 14, 2002
Tribute to my fallen brother Peter Bulago
Mr R.K. Baffour Baffour goes home
TOP STORIES