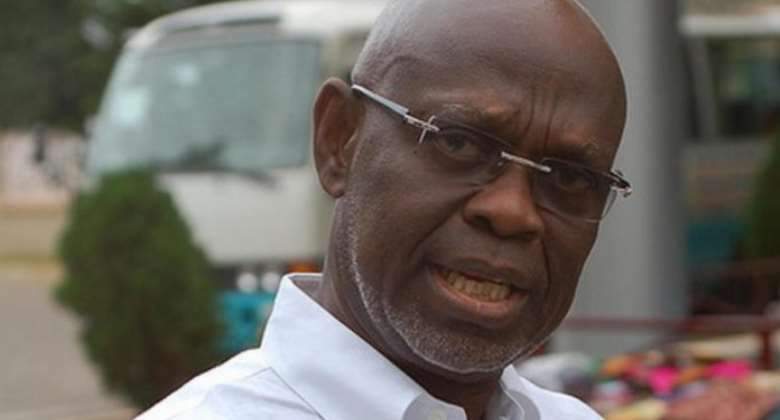 Please accept my regards and thanks to you very much for your valuable contributions towards Nation Building. As stated by you and others, things are currently very hard, which our President has acknowledged.

So, the President must demo good leadership especially look within and cut down expenditure including reducing the number of Ministries. He should have a second look at his duplication of functions by his creation of seemingly parallel institutions at the Presidency. He should reduce the loss of billions of dollars every year through smuggling in the Small Scale Mining Sector by introducing a third nomenclature in the Mining Sector as Medium Scale Mining or Junior Mining Companies by coming out with efficient regulations and effective enforcement of the regulations, to allow the Ghanaian miners or tycoons to collaborate with foreigners especially Chinese. As well as ensure no hoarding of the gold, that is, gold produced must be sold immediately or within 96hours of production to the Precious Minerals Marketing Company.

Please before I expatiate on the main topic let me digress on the topic for you to appreciate the writer. First of all, let me bring to your notice that it has been my nature since childhood to maintain the strong believe that the Almighty God purposely made man or human beings to adore him and this required speaking the truth because the Truth is God. So, this will require the Son of man (human being) to be very honest with the truth. Hence, as and when necessary the Son of man must endeavour to help in Nation building including sharing experiences and the right knowledge to the citizenry especially the young generations in their acquisition of sound knowledge/Skills. Hence, the Son of Man must always ensure to correct the wrongs of others in a society as much as possible, as part of a great responsibility to perform to his or her Country, Mankind, and History and above of all to the Supreme Being.

So, Sir, pardon me as usual to go into the archives for pertinent issues in order to give you further and better pen picture of myself, the writer. Sir, when as a student in the formative years in the late 1970s and was on Secondary School vacation in Bolga, together with other colleagues we became the darling boys of the then Upper East Regional Administration Officer, namely the late Mr JA Ampofo (papa Kofi Chali). So we (the darling boys of papa Kofi Chali) came out with the notion of engaging students on holidays in tree planting exercise in the Upper East Region, which the Regional Administration Officer bought and employed us to plant trees in the Region. The some of the trees in Bolgatanga and other areas were planted by us (students on vacation in the 1970s), as our contribution to National Development.

Pardon me again to take a trip down the memory lane to authenticate the above story. Sir, during the tree planting exercise in Bolga, a Deputy Administration Officer by name Mr Gregory Bayeh (a physical challenged person with one hand, who then drove his car with the better hand) spoke against the exercise as a waste with the notion that it was not sustainable since we may soon depart back to school and there was no plan to maintain them because according to him Kofi Chali’s aimed was to put some money into our pocket. Convinced that with God or prayers an Idea will always have legs (succeed). I was not pleased with this statement by him so, I encouraged some colleagues to join me to report his conduct (statement) to the then Regional Administration Officer. Based on that he was invited and rebuked for his statement though there was an element of truth in his statement. Kofi Chali told him that he was proud of us so he was prepared to release buses to the students, his northern poor boys and girls on holidays for them to run up and down in Bolga.

Kofi Chali was a very good friend to the late General Acheampong, because they both operated together in the Eastern Region or so, This made him to get funding and morale support from the then Head of State, who was very pleased with the very laudable idea of the tree planting exercise as part of the Head of State Award Scheme to arrest desertification and secure state lands among other good reasons. This Bolgatanga idea of engaging students on National Development contributed to the birth of the idea of the National Service Scheme by the late General Acheampong, which was introduced in 1973. The same idea was mooted and implemented by Brigadier General Apkastue and myself in the Military Barracks at Apremado (2BN) in Takoradi by procuring oil palm seedlings from Benso Oil Palm Plantation which were planted to help protect and secure the land of the Military Barracks at Apremado (2Bn). This idea was later bought by the then Minister of Defence (Hon Addo Kufour) who coincidentally had a former Commanding Officer of the same Unit (2Bn), the very refined and seasoned then Colonel OB Akwa, as the Senior Military Liaison Officer to his Ministry, who later became the ADC to the ex-President JA Kofour and rose to become the past Chief of Defence Staff. The then Minster of Defence helped the Unit with both Mango and Oil Palm Seedlings in our endeavour to secure and protect part of the lands of the Unit in order to arrest encroachment of the land.

Sir, I still remained resolute in my endeavour to contribute to National Development including correcting the wrongs in society. Hence, my numerous submissions or open letters to share experiences and knowledge to the Citizenry. So today, God has empowered me to make a take on some basic (fundamental) knowledge in economics which like my dear brother, His Excellency Ex-President JD Mahama was simply acquired in Secondary School up to the Sixth form.

Sir, some intellectuals or rather politicians and media houses especially Metro TV have failed to appreciate that all things being equal (Cetris paribus), if a nation’s fundamentals are weak the exchange rate will surely expose the ruling Administration however if the exchange rate depreciates it may not mean that the fundamentals are weak, as eloquently propounded by His Excellency Vice President Dr M Bawumia in 2014 then a Vice Presidential Candidate and a confirmation of same in 2019 as Vice President of Ghana. I will proof it with a simple logic. To help prevent the affected politicians and Metro TV from further polluting the minds of the citizenry that the government is lying with the explanation that the current state of the economy of Ghana is among others, the casual effects of both COVID-19 pandemic and Russia and Ukraine War. This has made the frequent replay by some media houses on the related sound bites of the then Vice Presidential candidate Dr M Bawumia in 2014, especially on the related economic fundamentals.

The actions of the affected politicians and some of the media houses have motivated me to employ a logic to let my fellow Ghanaians to appreciate that His Excellency Vice President Dr M Bawumia was 100% right with the relevant statement he made in 2014 which he fortified in 2019, as my contribution to validate this important Economics theory and or changing the current narrative for the development of National Economy.

Sir, at this juncture one may ask what are the fundamentals of Economics? Sir, Economics has become necessary due to scarcity and as such every society or Nation must have answers to three fundamental questions. Firstly what to produce due to limited resources? Secondly, How to produce? That is what resources are to be used in the production business and thirdly who is to consume what is produced or who acquires the products (outputs). Hence, the fundamentals of Economics embrace the basic quantitative and qualitative information that bring about the economic security of a society or a nation or a Company or currency and their subsequent financial valuation.

Sir, the fundamentals of a Nation are money supply, inflation rate, interest rates, the growth of Gross Domestic Product (GDP), trade balance surplus/deficits, etc which give the value of a nation. So and change of any of these fundamental variables may have an effect on the other variables.

So Sir, since external factors can also be regarded as fundamental variable of a Nation’s macroeconomics the exchange rate of a country should be determined by current and expected future values of noticeable fundamentals and the unnoticeable upsets or shocks.

As stated above, there are number of economic factors that affect the price of a currency, as stated these include interest rates, inflation rates, outputs and trade with foreign countries.

Sir, Interest rates have great impact on the demand for currencies. So economic fundamental analysts or the Central Bank of a Country will normally check a nation’s interest rates and the variables that affect interest rates between two different currencies. For instance, if interest rates are high in a country, the demand for treasury or financial bonds or treasury bills will be high as investors will like to make investments that offer a higher relative rate of returns. So, as investors buy treasury bills of a Country, the demand for the currency increases because the foreign traders need to exchange their currency for the foreign currency to purchase the treasury bills of the Country. This demand for treasury bills or bonds of a Country will therefore lead to an increase in the relative value of that country’s currency. Hence, the raising of the interest rate or prime rate by the Bank of Ghana was a correct tool to help restore the economy all other things remain equal. Likewise, the mere intention to pump 2 Billion Dollars in the System will forced people who did panic buying of Dollars either as a store of value or trading in dollars to quickly sell more of their dollars, hence the Cedis will thus gain strength against the dollar

Sir, inflation decreases the purchasing power of a country’s currency. So the Central Bank or Economy fundamental analysts will normally check at the relative levels of inflation in each country to evaluate the strength of each currency. All things remain equal, the causal effects of a country with higher inflation rate is a weaker currency, meaning the price of the foreign exchange will increase.

Hottest Photo Reports
Catch up with all the political quotes from our politicians.
Advertise here
More from Letter
ModernGhana Links
Open Letter to Ghanaweb, ModernGhana and the well-known journalist Kwesi Pratt regarding the Provision of Immediate Humanitarian Aid to the People of Ghana
Akosua Manu's Open Letter To Okudzeto Ablakwa On The National Cathedral
Open Letter To The Head Of Service Office Of The Head Of The Local Government Service (ohlgs)
TOP STORIES