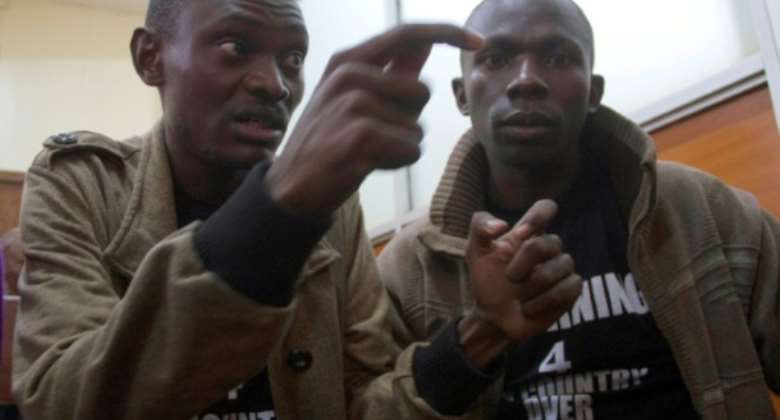 Norman Tumuhimbise (L) was due to launch a book critical of President Yoweri Museveni on March 30. By ISAAC KASAMANI (AFP/File)

A court in Uganda on Monday ordered the release on bail of activist Norman Tumuhimbise and a female journalist charged with cyber-stalking the country's president, their lawyers said.

Tumuhimbise, who heads local pressure group The Alternative Movement, was arrested alongside eight other journalists on March 10, including Farida Bikobere, who works with him at online media platform Digitalk TV.

The 36-year-old was due to launch a book critical of President Yoweri Museveni on March 30.

"They will continue appearing before the same (court) for the hearing of the case," said Eron Kiiza, their other counsel.

The duo were among nine journalists arrested for offensive communication under the Computer Misuse Act which can carry a one-year prison sentence and/or a fine.

Seven were released without being charged.

According to court documents, prosecutors allege Tumuhimbise and Bikobere used their online platform to relay "offensive communication... directed against the person of the President of Uganda".

Tumuhimbise and colleagues were reportedly bundled into a van by armed security personnel, with Kiiza alleging police also confiscated phones, laptops, recorders and cameras from the media outlet.

Tumuhimbise is the second writer to be charged with offensive communication in recent months.

Award-winning Ugandan author Kakwenza Rukirabashaija fled to Germany last month to seek medical treatment after allegedly having been tortured following his detention on charges of insulting Museveni and his son.

Rukirabashaija's arrest had raised international concern, with both the European Union and the United States calling for his release.

The charges against Rukirabashaija related to unflattering comments on Twitter about Museveni, who has ruled Uganda since 1986, and his powerful son Muhoozi Kainerugaba.

In one post, he described Kainerugaba, a general who many Ugandans believe is positioning himself to take over from his 77-year-old father, as "obese" and a "curmudgeon".