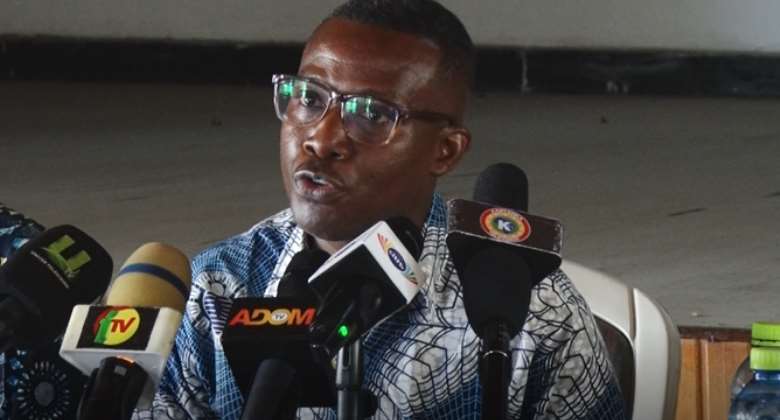 Workers at the Centre for National Culture in Accra are against moves by government to relocate the Arts Centre to Ghana House, as part of measures to make way for the Marine Drive Project.

The Divisional Chairman of the Centre for National Culture, Isaac Mensah, at a press conference organised by the Public Services Workers Union in Accra, said the decision to move staff of the Arts Centre is wrong.

He, therefore, pleaded with the Ministry of Tourism, Arts and Culture to have a stakeholder meeting with their Union to take a decision on the way forward.

“This relocation, please kindly halt it because it is even in the interest of the government. There is so much confusion in the system. The information is distorted and disjointed. For me as a union chairman, representing the very people who work for this institution, I learnt of this relocation on very a short notice,” he said.

“You are giving us less than even two weeks [to relocate]. How do we go about this? How do we remove our fittings and all that? This is not fair. There is so much to say but out of good faith, we are respectfully calling on the government to halt the relocation of the arts centre and make way for a broad stakeholder engagement,” he asked.

Also speaking at the press conference, the Member of Parliament for Klottey-Korle Constituency, Dr Zanetor Agyeman-Rawlings said the decision is not helpful to Ghana's arts and culture.

“The move is a bad idea. This place must be preserved and must be developed. If you are having problems with understanding the levels of productivity, do a proper audit. Do an environmental impact assessment and human impact assessment of the move and share it with us. Make it a public forum so that people can bring their suggestions because one person, one small group cannot be the repository of knowledge.”

Reiterating calls she made in the past with regard to the relocation, Zanetor said demolishing such an edifice of historical and cultural importance instead of preserving it as part of the Marine Drive Project, is something that needs to be reconsidered.

“…If in the concept of creating a Marine Drive which gives you cash to develop such a concept, one cannot understand the value of recreating this concept here so that you have a living art and cultural centre. So that when we have people who come into the country, as they perhaps go to the Castle, and they see the old houses in Osu, and they come down the high street, the Nkrumah Mausoleum is here. It stands to reason that the next thing is to have this place present,” she noted.

Deputy Minister of Tourism Arts and Culture, Mark Okraku-Mantey in an earlier interview with Citi TV on 5th November 2021, he said a new place was being built for the arts marketers at Kawukudi.

He added that, a 2,500-performance theatre will also be included in the Marine Drive Project.

The Arts Centre is situated on the 241-acres of land at the beachfront which has been marked for the Marine Drive Project, a redevelopment scheme to build Accra's waterfront.