Bobi, His Supporters & The Basic Laws Of Human Stupidity 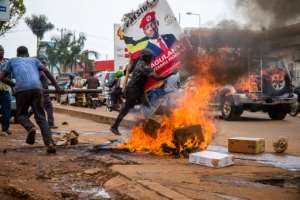 The stupidity of the general public and their gullibility is half the reason President Museveni has led Uganda for over 35 years, but the current opposition seems to be the joke of the century. Robert Kyagulanyi aka Bobi Wine was reportedly supposed to be the "real" messiah that was required in order to remove Museveni from power last year. But his politics has so far proven to be an unmitigated disaster.

In Basic Laws of Human Stupidity, economic historian Carlo Cipolla, presented 5 axioms on how stupid people attain power and endanger us. He inferred that the numbers of stupid individuals are underestimated, enabling them to emerge at inopportune times, consistently thwarting important endeavours.

To help us analyse, let’s look at Cipolla’s 5 Laws:

Law1: Always and inevitably everyone underestimates the number of stupid individuals in circulation.

Law 2: The probability that a certain person is stupid is independent of any other characteristic of that person.

Law 3: A stupid person is a person who causes losses to another person or to a group of persons while himself deriving no gain and even possibly incurring losses.

Law 4: Non-stupid people always underestimate the damaging power of stupid individuals. In particular non-stupid people constantly forget that at all times and places and under any circumstances to deal and/or associate with stupid people infallibly turns out to be a costly mistake.

Many Nupians have a loose relationship with facts. Their disregard for facts and reasoning is sometimes not a matter of stupidity or lack of education. For example, a lot of educated Nupians believed that Bobi was endorsed by the USA president during the 2020-21 elections because of a fake video that was circulating then. A lot of educated Nupians believed that elections could remove Museveni from power.

It’s not just misinformation gained from too many hours listening to Fred Lumbuye and other NUP bloggers, either, because correcting the falsehoods doesn’t change their opinions. For example, a lot of them still believe that NUP is a young party, yet it was founded in 2004.

Their stupidity equates emotion with logic. For instance, they emotionally feel Besigye is bad and always against Bobi, so anything that touches, in any way, his ideas, is evil and they're therefore free to attack without having a single neuron contemplate the topic at hand. Bobi, himself, didn’t support the Redcard front, a pressure group meant to sell defiance after the elections, simply because the idea was being chaired by Besigye. He wants to cause a loss to Besigye and FDC, yet it generally affects all Ugandans.

Even if one felt that Besigye wasn’t doing enough to remove Museveni, surely Bobi couldn’t have been the obvious choice to replace either Museveni or Besigye for an intelligent population. Given a summary of Bobi’s choices, one cannot claim that he makes good decisions. He has become " the best gift Baganda have ever given Museveni ", according to one Mukiiga mate of mine on UAH. Weakening Besigye made his standing in Museveni’s circles go through the roof.

As one German pastor, Dietrich Bonhoeffer, once wrote, ‘’the ultimate test of a moral society is the kind of world it leaves its children.” He used to speak out against Hitler before and after he was imprisoned. He argued that stupidity, not malice, was the root of German’s problems, and he believed that evil and malice can be exposed and prevented, but stupidity is a difficult thing to fight.

Nupians call anyone who dares to suggest some corruption mitigation in NUP a " mole". To play devil's advocate, the issues raised in the newspapers recently, especially extortion of MPs by Bobi and other NUP leaders, are one of critical judgement. When you think about it, though, corruption at NUP headquarters has been a common phenomenon since Bobi took over from Kibalama. The difference, of course, lies in the availability of evidence.

Nupians believe that it’s okay for their party to take billions from Interparty Organization for Dialogue-IPOD but not attend meetings –its more like a prostitute who takes a client’s money but doesn’t provide the services paid. Bobi’s motivation seems to be basically money and prestige.

The minimal requirement for a discussion is coherence and respect. A lot of Nupians would discuss Bobi even when the original poster is talking about religion or diabetes. When it comes to a total lack of courtesy, a surplus of rudeness, blackmail, propaganda, Bobi’s supporters are the champions. They call whoever criticises their leader a ‘hater’ –its difficult for them to differentiate between objective criticism and hatred. American philosopher Elbert Hubbard said, "to avoid criticism, do nothing, say nothing and be nothing."

To me being stupid does not necessarily mean you're not intelligent, you're just making unintelligent decisions. For example, spending money on hair when you have no food at home, that is stupidity to me. You're intelligent enough to know that you have to buy groceries, but you opt for doing your hair instead. So yes, an intelligent person can be stupid. Some of our leaders are an example of this. Also, we have to remember that intelligence is relative. Whilst you might be the smartest person when you're with your friends, you can be the least smart when you're with other people.

If Bobi steps down as NUP leader, and a delegates’ conference is organised for NUP to choose another leader, he might be able to stop the bleeding of the party. But he won't because he will never admit that he is weakening the opposition every passing day, and on top of that he is weak, a show-off and just wants to coast for another 5 -10 years just like he coasted in music the previous 20 years, especially fighting childish wars with Bebe Cool. The man is a walking train wreck.

Reports suggesting we have accused police of 'hiding' interc...
28 minutes ago