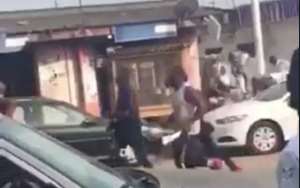 Seven of the eleven accused persons in Tuesday’s violence at Nima and Mamobi in Accra have pleaded not guilty to charges of rioting and causing harm.

Lawyers for the seven told the Accra Circuit Court presided over by Mrs. Rosemond Baah Torsu that their clients had no connection whatsoever with Tuesday’s gun violence.

The accused persons are all said to have alibi to vouch for their whereabouts on the said date.

Chief Inspector Denis Terkpetey narrated the facts of the case to the court as follows and described the incident as a riot involving the usage of arms and other offensive weapons.

Praying for bail for the accused persons, a lawyer, Seth Gyapong Oware disclosed to the court that his client, Bashiru Ganiru, was an innocent person who tried helping casualties of the shootings but was rather arrested and accused.

He told the court that the accused person was called upon by some community members to convey the injured persons with his car to the hospital, and it was in the process that he got arrested.

A search is said to have subsequently been conducted in his car and house, and no weapons were found.

Yaw Dankwah, the lawyer for two other accused persons, said his clients were arrested from their farm and wondered why the police could link them to the violence.

The court, however, denied them bail, saying it was early days yet and the police were yet to demonstrate any undue delays.

The court, however, ordered the police to investigate the alibi of the accused persons for the next adjourned date of February 1, 2022, at 10.30 am.