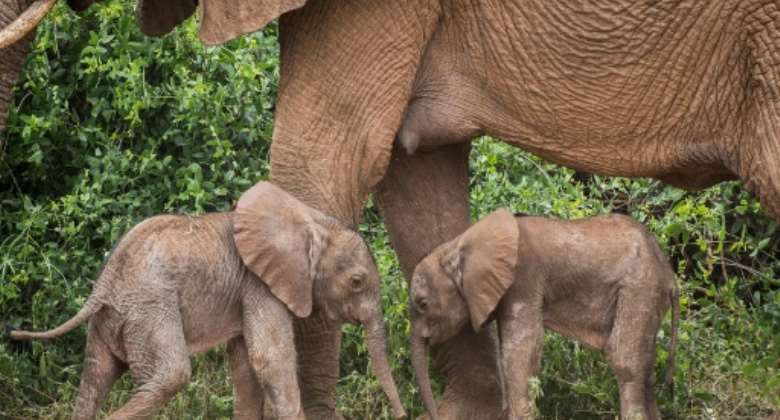 Conservation group Save the Elephants said the twins were first spotted by lucky tourist guides on a safari drive Samburu Reserve in northern Kenya. By Jane Wynyard SAVE THE ELEPHANTSAFP

An elephant in Kenya has given birth to twins, an extremely rare event, conservationists said Thursday.

Conservation group Save the Elephants said the twins -- one male and one female -- were born to a mother named Bora.

They were first spotted by lucky tourist guides on a safari drive at the weekend in Samburu reserve in northern Kenya.

Videos show the days-old newborns getting accustomed to their savannah surroundings with their doting mother and an older sibling, Bora's first calf, born in 2017.

African elephants have the largest gestation period of any living mammal, carrying their young for nearly 22 months, and gives birth roughly every four years.

"Twins are rarely encountered in elephant populations and form about only one percent of births," Save the Elephants' founder Iain Douglas-Hamilton said in a statement.

However, elephant twins do not often fare so well. The last pair of twins born in Samburu, in 2006, failed to survive more than a few days.

"The next few days will be touch-and-go for the new twins, but we all have our fingers crossed for their survival."

There are an estimated 36,280 elephants in Kenya, according to the country's first-ever national wildlife census conducted last year.

Just one-in-100 elephant births result in twins. By Jane Wynyard SAVE THE ELEPHANTSAFP

That figure represented a 12-percent increase in population numbers recorded in 2014, when killing for ivory was higher.

The International Union for Conservation of Nature (IUCN) warned last year that poaching and habitat destruction, particularly due to land conversion for agriculture, had had a devastating effect on elephant numbers in Africa as a whole.

The population of African savanna elephants plunged by at least 60 percent in the last half century, prompting their reclassification as "endangered" in the latest update to the IUCN's "Red List" of threatened species.