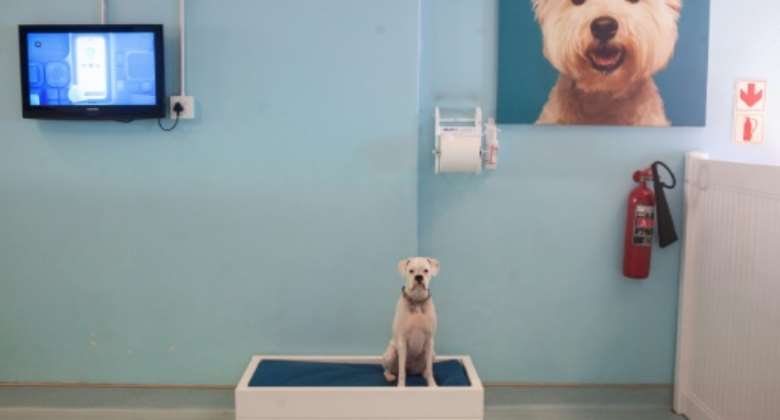 Dogs can stay in the budget section of the hotel, where they hang out together, or have a private 'presidential suite'. By Alessandro iovino (AFP)

Three dachshunds lay claim to a big bed, while an agitated mongrel yaps constantly and a miniature schnauzer appears disgruntled despite soothing Bob Marley tunes playing over the stereo.

It's just another morning at SuperWoof, a luxury dog hotel in South Africa's city of Cape Town, where the wealthy check in their canines for some serious pampering.

Should the dogs feel like a sundowner later, drinks are available in little bottles of ChamPaws -- a cocktail of water with a dash of rose petal and South Africa's famous rooibos tea.

Opposite the dog hotel is a night shelter for Cape Town's many homeless -- a pervasive legacy of apartheid. And a short distance down the road, a makeshift tented camp has mushroomed on the curb.

But for wealthier South Africans, doggy daycares or fancy hotels are where they leave their furry babies while away on overseas vacation, or if they are just unavailable for one reason or another.

Should the dogs feel like a sundowner later, drinks are available in little bottles of ChamPaws. By Alessandro iovino (AFP)

SuperWoof competitor AtFrits is located in a rapidly gentrifying district.

Situated near the colourful houses of the Bo-Kaap district, this home-away-from-home for dogs is surrounded by hipster cafes, art galleries and sushi restaurants.

Inside, dogs can stay in the budget section of the hotel, where they hang out together, or have a private "presidential suite."

These are decked out with baroque chandeliers and exquisite wallpapers, with canine portraits in faux-gilt frames on the walls.

One suite has a tongue-in-cheek name: "K9 Nkandla" -- a nod to ex-president Jacob Zuma's massive rural homestead, which the scandal-plagued ex-leader notoriously upgraded using millions of dollars in public funds.

Dogs have been a divisive topic in South Africa.

They were used by apartheid police to crack down on protesters during the liberation struggle.

Some politicians complain that whites care more about their pets than the majority of their impoverished black compatriots.. By Alessandro iovino (AFP)

Some politicians complain that whites care more about their pets than the majority of their impoverished black compatriots.

"If a person can afford to keep their dog in such circumstances that's their business," said Hassan Khan, who works at The Haven District 6 feeding centre next to SuperWoof.

Tilana Kruger, a 35-year-old property broker, recently moved to Cape Town from Johannesburg and regularly drops off her beagle at AtFrits.

"He can't wait, he literally jumps out the car," she told AFP by phone.

Whether luxury dog hotels should exist in a country with such high levels of poverty and inequality remains a moot point.

A stay in the most expensive of AtFrits' rooms costs 535 rand ($35) a day. The government puts the national poverty line at 890 rand a month.

AtFrits owner Yanic Klue argues that that she is doing her bit to fight poverty by creating employment.

She donates 10 percent of the hotel's earnings towards helping stray dogs, including sterilisation.

South Africa's strict lockdown at the beginning of the Covid-19 pandemic depressed demand for dog hotels because people worked from home and didn't go on vacation.

An educator working takes care of some of the dogs in the one room one at @Frits hotel in Cape Town on December 14, 2021. Wealthier South Africans take their dogs to doggy daycares or fancy dog hotels while they are away.. By Alessandro iovino (AFP)

But with the economy re-opening, owners are returning to the office, and many dogs are now experiencing separation anxiety.

The hotel offers a range of therapies for suffering hounds, including gemstone therapy and reiki, a Japanese relaxation technique, said Klue.

Dogs "also have chakras and they also get blockages," she explained, referring to the belief that the body has points through which energy flows, providing harmony.

And for those equally anxious owners who want to check in on their pups while they are away, cameras in all the hotel rooms mean they can watch their pet's antics any time... on "Petflix."