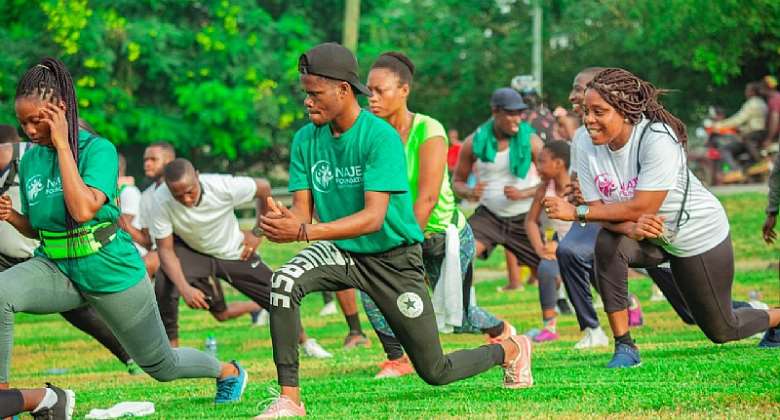 Najel Foundation, as part of a conscious effort in promoting, maintaining and increasing the awareness of healthy living, keeping fit and regular exercise among Ghanaians, led a health walk on the Aburi Mountains, Eastern Region.

Organised during the New Year holiday, the health walk witnessed participants from Najel Foundation using an encouraging ample time of 45 minutes to jog on the undulating and wavy edges of the Aburi Mountains, which commenced from Ayi Mensah to the Peduase Township.

About 300 participants joined an aerobic session at Peduase led by experienced Physical Training Instructors from the Ghana Customs Service who professionally facilitated the aerobics by taking participants through physical training exercises and athleticism that would help build their physique.

The formidable team from Customs again led the Najel Foundation members to some healthy physical training lifestyles that would enable them live well.

Najel Foundation, in conjunction with the above mentioned clubs, keenly contested in fun games including Table Tennis, Ludu, draft, apple in water among others.

The fun games which was climaxed with soccer galore, saw Najel Foundation members from both women and men divisions exhibiting their football prowess by winning two goals to zero against the other clubs who merged to play.

With support from Good Day Energy Drink, the fun games which took place at the foyer of Larteh-Akropong Presby Primary School saw participants thrilling themselves in a dancing competition that demonstrated sensational dancing skills from both contenders which mesmerized the audience.

Executive Director of Najel Foundation, Mrs. Naomi Naa Adjeley Anang reiterated the foundation’s commitment to promoting the agenda of healthy living among Ghanaians through such programs.

She admonished Ghanaians about lifestyle modification which is detrimental to their health.

She again thanked the members of Najel Foundation for always supporting the initiative and advised them to always live a healthy lifestyle.