Two Years of Advocacy Against Witch Persecution in Africa 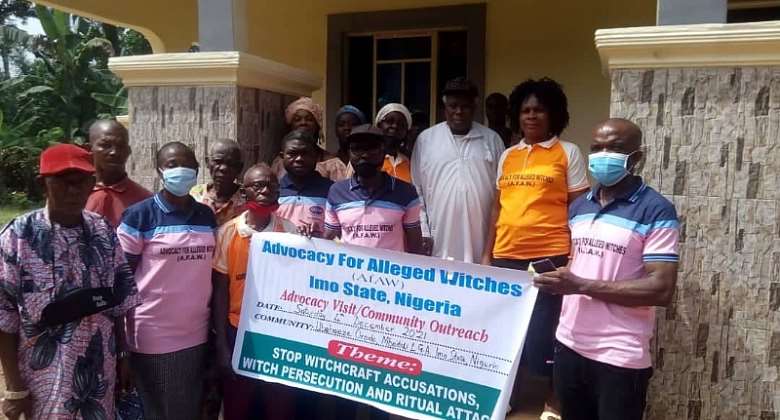 Two years ago, the Advocacy for Alleged Witches (AfAW) campaign was launched. This initiative was put in place to tackle witchcraft accusations and witch persecution in Africa. Campaign against witch-hunting in the region had too many missing links. AfAW was founded to supply these links, and yes to try and right the wrongs of witch-hunting in Africa. I had objections to how the issue of witchcraft accusations in Africa had been explained and addressed. Over the years misrepresentation of African witchcraft has yielded a mistaken approach to the problem. I was deeply disappointed by the lackluster take on various abuses linked to witch persecution in the region. I believed and still believe that Africa deserves better; the continent needs a more robust and effective campaign against witch persecution.

I had serious doubts and objections to how mainly western anthropologists explained African witchcraft because the explanation was one-sided. The explanation otherized Africa and Africans. The anthropology of witchcraft created a stereotypic image of Africa. In an attempt to make sense of the continued manifestation of witchcraft accusations in the region, western scholars advanced the notion that witchcraft belief was useful to Africans; that witchcraft accusations served domestic purposes and fulfilled social stabilizing functions. Since the times of Evans-Pritchard, generations of western scholars and their African allies have jostled to out-explain one another on how witchcraft accusations benefit Africa. They made witchcraft the gatekeeping concept, a frame to study, examine and understand ancient and modern Africa, pre-colonial, colonial, and post-colonial Africa. Witchcraft accusation has been designated and presented as a mechanism that African societies need to function. Really?

Unfortunately, in explaining African witchcraft, scholars have mainly focused on the accusers and witch hunters, ignoring the accused and the witch-hunted. They have explained African witchcraft based on what those who entertain occult fears and anxieties say and do, overlooking how accused persons respond and react. Scholars have overlooked the destructive, disruptive, and destabilizing impact of witchcraft accusations and witch persecution. The seemingly useful portrayal of African witchcraft has made it difficult to treat the wild phenomenon of witchcraft allegation with the urgency that it deserves. Witch hunters are seen as `social and community service providers, not as lawbreakers and criminals.

This mis/understanding of African witchcraft has made it challenging to rally the UN and other international agencies against abuses linked to witchcraft beliefs. By the way the UN has recently passes a resolution against abuses linked to witchcraft beliefs. But it is left to be seen how this resolution would be translated into concrete actions. Many organizations are reluctant to tackle witch persecution headlong. They are concerned that they could be accused of racism or colonialism. So to avoid being labeled racist or colonialist, agencies fail to do the needful; they equivocate and paper over the problem. International NGOs have refused to call witchcraft and witch-hunting by their names. But the whole blame cannot solely be placed on western anthropologists, the UN, and other international agencies.

The attitudes of Africans have not helped matters. Many Africans have appropriated and internalized this misconceived and stereotypic notion. They conflate being African and believing in witchcraft, identity politics, and witchcraft politics as if both are inextricably linked. Look, they are not. Witch-hunting feature -and have featured- in other non-African cultures.

If other societies did not tie witchcraft belief to their identity, why should Africans do so?

Although many Africans are socialized to believe in witchcraft and the supernatural world, there are Africans who do not subscribe to these superstitious formations. If there is anything that needs to be decoupled and disentangled in discourses on Africa, it is witchcraft belief and African identity because the conflation of these beliefs and African identity has made it extremely hard to mobilize Africans against witch persecution in the region.

So the continent of Africa needs more effective and robust efforts to correct the pervasive misconceptions and eradicate witch persecution. Witch-hunting in Africa needs to be tackled with a sense of urgency and pragmatism. Campaign against witch persecution and witch-hunting needs a change in strategy and approach. AfAW was founded to fill in this gap and to fulfill this crucial need.

In 2020, AfAW outlined a decade of activism to guide this campaign initiative to realize a critical mass of advocates in all African countries. AfAW aims to make witch-hunting history by 2030. This goal has elicited mixed reactions. Some people have dismissed it as unrealistic. For them, Africans are so hardwired to witchcraft accusations and witch persecution that ten years are not enough to weaken the grip of this belief in the minds of the people. So they claim that a decade does not suffice to get Africans to abandon this entrenched superstition.

But others have welcomed the development. British biologist, Richard Dawkins, tweeted that we should not wait until 2030 to end witch hunting in Africa; that witch persecution should end immediately. Simply put, ending witch-hunting in Africa is long overdue. And at AfAW we agree with this sentiment. We are guided by this vision. We are inspired and motivated by the move to make witch-hunting history. At AfAW, we are excited that witch-hunting in Africa has been given an expiration date; that witch persecution would, at last, get the attention it deserves locally and internationally. To this end, AfAW has, in the past two years, worked and campaigned to educate and enlighten the people. Social media have been used to track cases of accusation, and to educate and enlighten witchcraft believers and accusers. AfAW has used various channels to get Africans to understand that the misfortunes which they experience have no connection with witchcraft or magic; that alleged witches are innocent. In this campaign, AfAW has prioritized the safety, humanity, and human rights of the accused because witchcraft accusation remains a form of death sentence in many communities.

In the past two years, AfAW has supported victims of witch persecution in Nigeria and beyond. It has provided material and financial support wherever and whenever they could. The group has supported the relocation of victims in Imo, Cross River, and Abia states in Nigeria. AfAW has defrayed the costs of medical treatment of some victims in Cross River, Adamawa, and Plateau states in Nigeria. The group has sponsored the education of child witch victims in Ogun and Plateau states. AfAW's advocacy work is not limited to Nigeria. The group has intervened in cases of witch persecution in other African countries.

AfAW has supported the schooling of a girl child accused and subsequently expelled from her school in Liberia. AfAW has responded in solidarity with victims of witch persecution in Ghana, Malawi, Kenya, South Africa, the Central African Republic, Zambia, and Zimbabwe. AfAW has drawn the attention of police and other state authorities to the plight of victims in these countries. In Ndola, Zambia, where the police closed down a church that was used as a hospital, AfAW called to commend the police. Witch persecution is often linked to the activities of pastors. AfAW phoned and messaged the police in Ghana, Kenya, and Malawi urging them to take action against witch hunters. AfAW petitioned the chief justice of Nigeria and Adamawa, Oyo, and Abuja to call witch-hunting judges and magistrates to order. Petitions were sent to the president of Liberia, Malawi, Ghana, and Kenya asking them to take measures to end witch persecution. So in cases where authorities failed in their duties, AfAW called them out and pressured them to fulfill their constitutional duties. And the months and years ahead, this pressuring will continue.

AfAW has commenced grassroots programs to reorient the minds of witchcraft believers and accusers. Witch persecution persists because many people believe that witchcraft is a crime. Abuses linked to witchcraft beliefs would not stop until a critical mass of Africans in rural and urban communities realize that witchcraft is a form of superstition. Advocacy visits have been organized in Imo state in southern Nigeria. A team of advocates leads these visits to the communities. The advocates engage the community leaders; they try to identify, understand and engage drivers of abuses linked to witchcraft beliefs. There are plans to extend the community outreach to other parts of southern and northern Nigeria and beyond. While AfAW has made significant progress in the past two years, challenges remain. Many cases of witch persecution go unnoticed or the information comes too little too late. For instance, it took months before the information about a young man accused of witchcraft and subsequently thrown into a river in Ezza North in Ebonyi state got to AfAW. In Adamawa, Plateau, Abia, Imo, and Cross River states, there have been instances where the police enabled miscarriage of justice. They have been reluctant to investigate abuses linked to witchcraft accusations. Court processes have been marked by delays and postponement of hearing dates in Cross River, Delta, Adamawa, and Abia states. In many cases, the delay in the proceeding has frustrated alleged witches and caused families or relatives to lose interest in pursuing justice. Despite these challenges, AfAW has recorded significant gains and progress. And the progress will continue!

AfAW could not have accomplished all these in a very short time without the active involvement of volunteers across Africa and beyond. Many of these volunteers have drawn the attention of AfAW instances of witchcraft accusations and witch persecution. At a time when the COVID-19 made it difficult to travel even if there were funds, some volunteers have provided free legal and humanitarian services or helped deliver petitions to police stations and other local authorities. AfAW is grateful to its numerous supporters and activists; to its international partners, Humanists International, Hilfe für Hexenjagdflüchtlinge Germany, Association of Black Humanists, Basic Rights Counsel Initiative, Witches of Scotland as it looks forward to more years of activism against witch persecution in Africa.