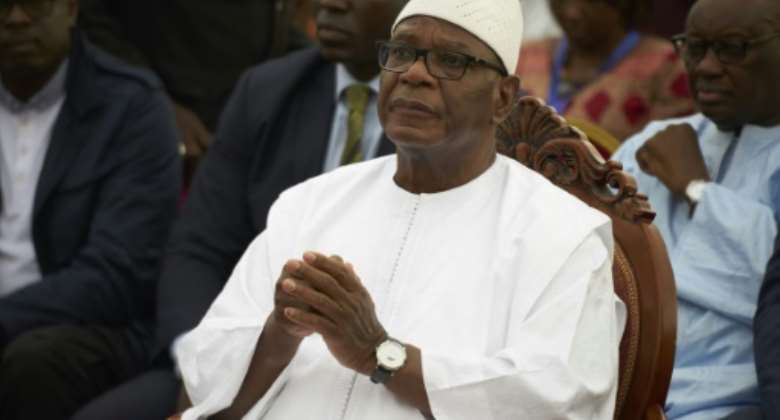 The political veteran known as IBK was described variously by his entourage as generous, irascible and divisive. By Michele CATTANI, Michele CATTANI (AFP/File)

Mali's former president Ibrahim Boubacar Keita, who died Sunday aged 76, became the symbol of the poor Sahel country's political turmoil after his unpopularity spurred his ousting in a military coup in August 2020.

The mutinous soldiers quickly arrested the leader known by his initials IBK, who had steadily lost his grip as the landlocked West African state became increasingly beset by jihadist attacks and inter-ethnic violence.

Keita, who was elected in a landslide in 2013 and won re-election five years later, had long relied on an uncompromising image to project command over the coup-prone country of 19 million people.

He had been able to shrug off criticism from a divided opposition, partly relying on support from the international community -- notably former colonial power France -- which saw him as a bulwark against the jihadist threat.

But in addition to the violence that has claimed thousands of lives and displaced hundreds of thousands more, snail-paced political reforms, a flagging economy, decrepit public services and a widely shared perception of government corruption also fed anti-Keita sentiment, driving masses of protesters into the streets.

Keita's son Karim, who had a reputation as a playboy, also fueled popular anger, and he ended up resigning as head of the parliamentary defence committee.

The coronavirus pandemic and the kidnapping of opposition leader Soumaila Cisse by jihadists in March 2020 made further inroads into Keita's standing.

Cisse died in December 2020 of Covid.

The political veteran was described variously by his entourage as generous, irascible and divisive.

As a socialist prime minister between 1994 and 2000, he quelled a series of crippling strikes, earning a reputation as a firm leader and helping to set up his runaway election victory in 2013 -- when he finally ascended to the presidency after losing runs in 2002 and 2007.

He had campaigned as a unifying figure in his fractured country, belying his tough-talking reputation. Keita was re-elected in 2018, defeating Cisse.