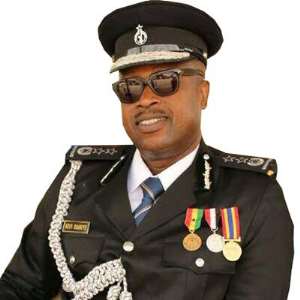 Personnel from the Accra Regional Police Command have busted a man who is alleged to be using the name of Commissioner of Police (COP) Nathan Kofi Boakye, Director -General in charge of Legal and Prosecutions of the Ghana Police Service, to perpetrate fraud.

The suspect, Ernest Bondzie Arthur, 36, unemployed, is reported to have swindled two people of GH¢8,000 under the pretext of getting them enlisted into the Ghana Police Service.

According to the police, he reportedly collected the money from his victims in Accra recently during the ongoing recruitment exercise and absconded.

The Public Relations Officer (PRO) of the Accra Regional Police Command, Deputy Superintendent of Police (DSP) Juliana Obeng, confirming the arrest to the DAILY GUIDE, said the complainants got to know the suspect in 2014 and 2021 respectively.

“In the recent police recruitment exercise, the suspect told his victims he had contact with the senior police officer COP Boakye, through whom he could get them enlisted into the service,” DSP Obeng disclosed.

DSP Obeng said both victims showed interest in the recruitment and paid GH¢2,000 and GH¢6,000 respectively to the suspect, adding “after collecting the money, the suspect absconded and failed to answer the calls from the complainants and so a report was lodged with the police.”

She said the police, through investigations, apprehended the suspect from his hideout in Accra over the weekend where he admitted to the offence levelled against him.

DSP Obeng said the suspect would be put before court for impersonation and defrauding by false pretenses.