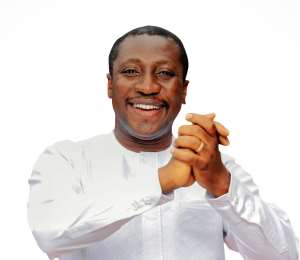 The Member of Parliament (MP) for Effutu Constituency in the Central Region, Hon. Alexander Kwamina Afenyo-Markin has been named the Best Majority MP for 2021.

This is according to FAKS Investigative Services known for conducting reliable surveys in the last decade.

After being elected by the people of Effutu on the ticket of the New Patriotic Party (NPP) to serve another term in Parliament in 2020, Mr. Afenyo-Markin was subsequently elected as the Deputy Majority Leader in the House.

Modernghana News can authoritatively report that the MP from all indications excelled in both capacities throughout 2021. He is well articulate in representing the views of the Majority in Parliament with his linguistic artistry and visibly demonstrated knowledge of parliamentary work.

Not only did he lead NPP MPs to champion the business of government in Parliament but has also blown the minds of the Effutu people with live changing developmental projects.

For his hard work, people engaged by FAKS Investigative Services in a survey last year voted him as the Best Majority MP.

According to FAKS, the survey focused on opinions from the public, assessment from the ministries, agencies and as well as information from the Regional Coordinating Councils (RCCs).

The public contributed largely to the outcome of the survey, especially concerning the Ministers, Deputy Ministers, Regional Ministers and the CEOs of State Institutions.

FAKS Investigative Services team is made up of researchers, media practitioners and academia that do the assessment based on the outcome of the findings they received.

The survey took place between the months of October and December, 2021 and it was the 10th Edition since FAKS started this project.

Five die in accident on Techiman –Tuobodom highway
48 minutes ago