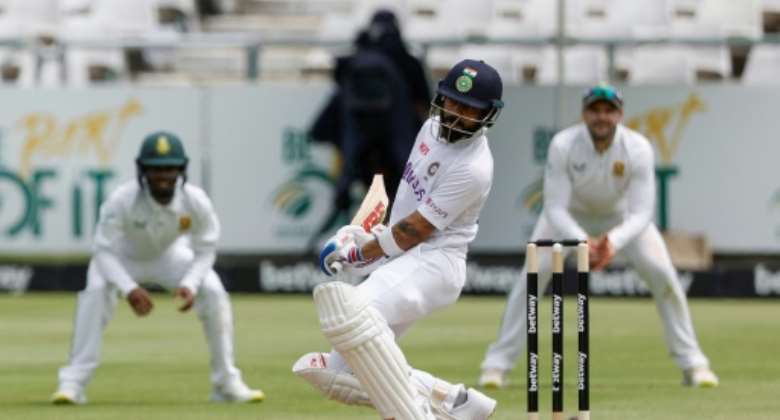 India captain Virat Kohli was made to battle hard on his way to 40 not out at tea on the first day of the third Test against South Africa. By Marco Longari AFP

Indian captain Virat Kohli batted patiently as his team struggled against hostile South African fast bowling on the first day of the series-deciding third Test at Newlands on Tuesday.

India were 141 for four at tea after Kohli won the toss and decided to bat under overcast skies.

Kohli had reached 40 not out off 139 balls after India lost both their openers inside the first hour.

Duanne Olivier had KL Rahul caught behind for 12 and Kagiso Rabada had Mayank Agarwal caught at second slip in the next over to reduce India to 33 for two in the 13th over.

Cheteshwar Pujara and Kohli added 62 for the third wicket before Pujara was caught behind off left-arm fast bowler Marco Jansen for 43. Kohli made only 17 off 80 balls during the stand.

Rabada, playing in his 50th Test, produced a superb delivery to have Ajinkya Rahane caught behind for nine.

Kohli hooked Rabada for six but had to withstand some testing bowling from the fast bowler, being beaten outside the off stump several times and edging just short of Aiden Markram at second slip.

The three-match series is tied at 1-1.

South Africa named an unchanged team after winning the second Test in Johannesburg to level the three-match series at 1-1.