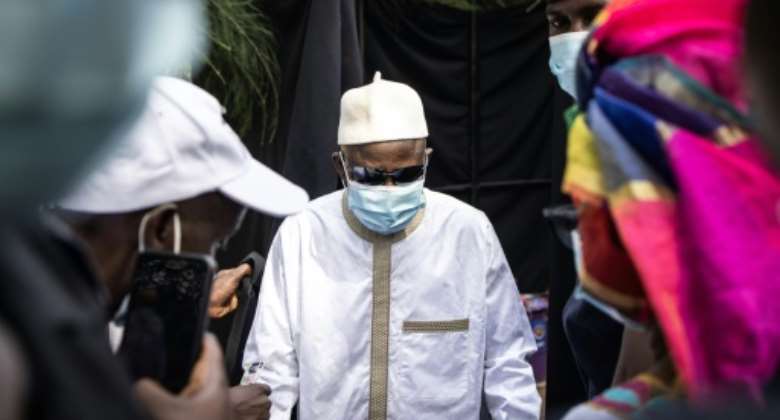 Ousainou Darboe, who came second in Saturday's election, told a gathering of his supporters to "have lunch and disperse". By JOHN WESSELS (AFP)

The runner-up in The Gambia's weekend presidential election said on Monday he would challenge the results in court if necessary, while calling on his supporters to remain calm and reject violence.

The vote is a seen a crucial test for the young West African democracy, with the final results showing President Adama Barrow easily winning re-election after his first five-year term brought an end to 22 years of dictatorship.

However his rivals have sought to challenge the results of Saturday's vote, which European Union observers said marked "democratic headway" while noting some flaws.

Darboe addressed dozens of his supporters gathered outside his home in the capital Banjul on Monday.

"Have lunch and disperse," he told them.

"This country is a peaceful country and I don't want to see any violent behaviour from anyone.

"I ask all of you to keep the peace."

As a lawyer Darboe often represented the opponents of dictator Yahya Jammeh, who seized power in a coup in 1994 and ruled with an iron fist until he was beaten by Barrow in a 2016 election.

Gambia President Adama Barrow celebrates after his re-election was announced on Sunday. By JOHN WESSELS (AFP/File)

He and two others of the six candidates have challenged the election results, saying they have launched investigations but not detailing specific complaints.

"If our lawyers present to us the evidence, we will go to the court," Darboe said.

He also stressed that any violence could scare away tourism, an important source of income for the country.

Turnout was 87 percent for the election, which was monitored by both Gambian and international observers.

However it added that there were "critical gaps, restrictions, and legal uncertainties that require significant reform".

"The monetisation of the campaign and the advantage of incumbency also led to an unlevel playing field," the report said.

The Gambia's human rights commission said that "despite some isolated technical challenges" the vote was the "manifestation of our growing democracy".